A solemn ceremony to hand over new combat and training aircraft Yak-130 to personnel of the 116th Guards Attack Air Base took place in Lida on 11 May, BelTA has learned. 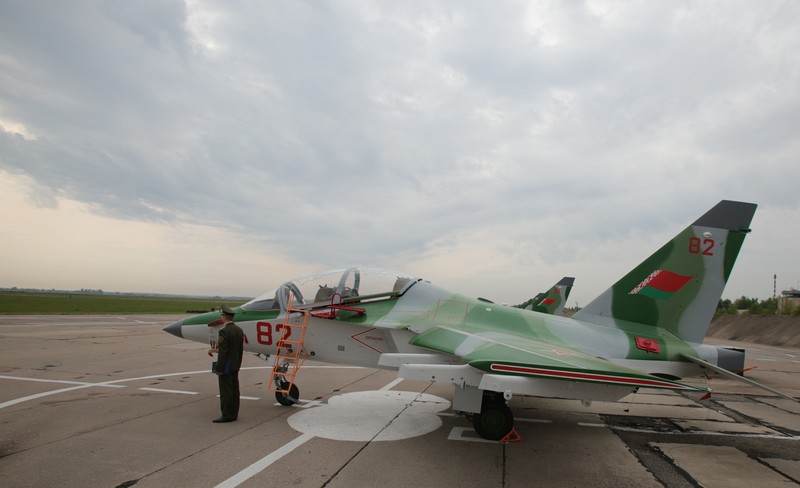 Belarusian Defense Minister Andrei Ravkov handed over papers of the four new aircraft to representatives of the air base. With the latest additions the air base will have a total of 12 Yak-130 combat and training aircraft. These aircraft were previously delivered to the air base in lots of four in 2015 and 2016.

The defense minister noted that the aircraft had been bought as part of the concept of building and developing the Armed Forces for the period till 2020. Pilots have been trained and a system to take care of these aircraft’s maintenance has been established. Andrei Ravkov stressed that unique flying and technical parameters of the Yak-130 aircraft had considerably improved the Air Force’s ability to train pilots. “First of all, the aircraft allow training pilots how to also fly the aircraft we intend to buy, in particular, Su-30SM. Second, despite its training designation the aircraft can carry up to 3 tonnes of ordnance,” the defense minister noted. The choice of weapons, other parameters, and combat effectiveness of the Yak-130 aircraft are on par with Su-25 attack aircraft. The Yak-130 aircraft can also be used as fighters.

The Air Force pilots definitely appreciated parameters of the new aircraft. “Yak-130 is a cutting-edge extremely maneuverable aircraft, which allows performing all kinds of aerobatic maneuvers. It is perfect for training novice pilots. For many of them Yak-130 is their first aircraft,” noted Oleg Oleinik, Chief of Staff, First Deputy Commander of the 116th Guards Attack Air Base. He demonstrated the aircraft’s capabilities in practice by performing aerobatic maneuvers at low and extremely low altitudes.

Andrei Ravkov noted that the acquisition of new hardware and the modernization of the available hardware is one of the most important tasks the army has to accomplish. In 2019 the army intends to acquire new radar stations Sopka and Protivnik-G. The modernization of T-72 tanks will continue.