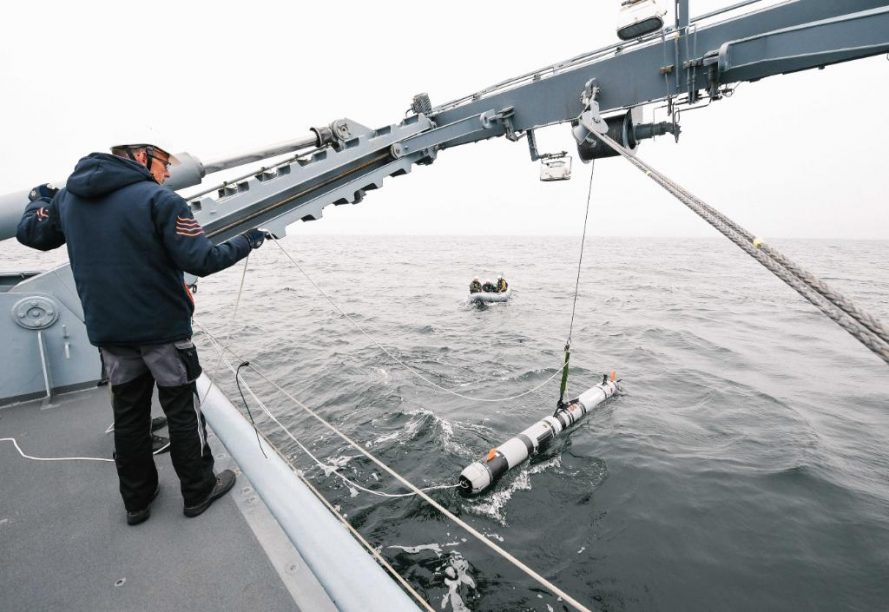 The squadron is using the opportunity to work from Hohn Air Base for more than two weeks to deliver new systems to the Baltic Sea region for the first time. The team is participating in BALTOPS to use the Airborne Laser Mine Detection System (ALMDS) and Airborne Mine Neutralization System – Archerfish (AMNS-AF) for their first time in the operating environment in order to bring commanders expanded AMCM capability.

“In concert with our partners and allies, this is a real opportunity to up the game from an airborne mine countermeasures perspective,” said Vice Adm. Andrew Lewis, commander of U.S. Second Fleet, who is leading BALTOPS 2019 on behalf of Commander, Naval Forces Europe.

ALMDS and AMNS-AF are each operated from the MH-60S helicopter. ALMDS is a laser-based, high-area-coverage system that uses streak-tube imaging light detection and ranging (LIDAR) to detect, classify and localize near-surface, moored mines. AMNS-AF provides rapid reacquisition, identification and neutralization capability against bottom and moored sea mines. AMNS-AF will explosively neutralize unburied bottom and moored sea mines that are located during mine-hunting operations.

ALMDS and AMNS-AF are programs managed by the Mine Warfare Program Office (PMS 495) in Program Executive Office Unmanned and Small Combatants. All AMCM mission modules (near-surface detection, coastal mine reconnaissance and airborne mine neutralization) that are part of the MCM Mission Package are certified for deployment on the Independence-variant littoral combat ships (LCSs) and the program is on track to certify all AMCM mission modules on Freedom-variant LCSs in 2019.

The BALTOPS 2019 Mine Warfare Task Group include members from the nations of Latvia, Lithuania, Poland, Denmark, Belgium, Germany, the Netherlands, Norway, the United Kingdom, France, and the United States.