The Latvian military has taken delivery of several Husky mine detection vehicles from the United States. 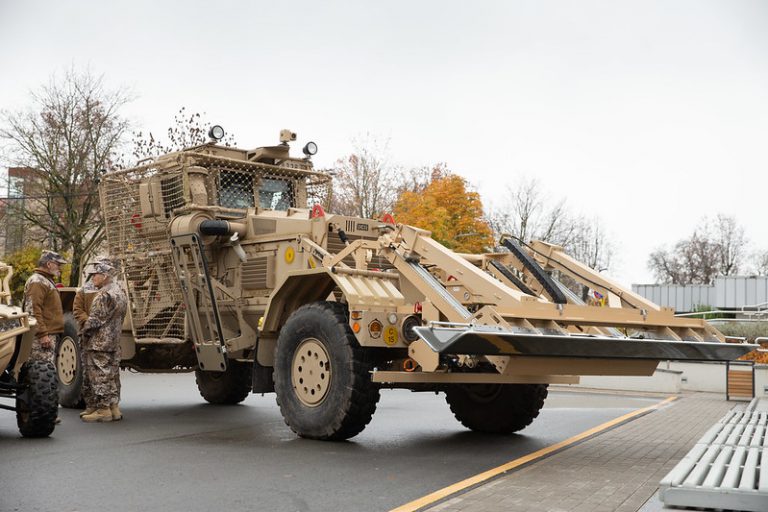 The Latvian military on 18 October held a ceremony in Ogre, Latvia, during which the National Guard received three Husky vehicles from the United States, which were supplied by Critical Solutions International (CSI) and DCD Protected Mobility.

The three Huskies are worth 7.2 million euros, according to Latvia’s defence ministry. They will be operated by the 54th Engineer Battalion of the 2nd National Guard Brigade. They were delivered through the US Foreign Military Financing programme.

The US Army in April 2017 awarded CSI a long-term $132 million contract for Husky 2G vehicles and its associated route clearance payloads, which has enabled states such as Egypt, Saudi Arabia, Jordan and Latvia to acquire 21 vehicles. Another 20 vehicles were ordered through the US State Department’s Special Defence Acquisition Fund (SDAF). Deliveries have been completed, with Egypt receiving its vehicles by April this year, for example.

The Husky is DCD’s flagship route clearance vehicle, and is able to detect mines at 5km/h-35km/h. It uses metal detectors for metallic mines and ground-penetrating radar for non-metal mines, but can be fitted with various sensors and interrogation arms. The Husky comes in several variants, including the single seat Husky Mk III, second generation two seat Husky 2G and optionally unmanned Autonomous Husky. The vehicle can be fitted with a wide variety of sensors and optional extras, including cameras, mine roller system, cyclone blower, remote weapons station, 360-degree camera system, gunshot detection system and RPG protection nets. Defence Web

Uzbekistan has received next batch of Typhoon-K armored vehicles