Turkish company Meteksan Defence has delivered the MSH-01 Hydrophones, which are used as sensors of the sonars onboard AY- and PREVEZE-Class Submarines, to TurkishNaval Forces Command. 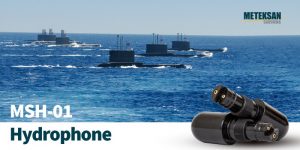 The MSH-01 Hydrophone, designed andproduced by Meteksan Defence, is usedas a sensor in the Cylindrical Hydrophone Array (CHA) and Passive Ranging Sonar (PRS), which constitutes the wet side of the

Passive Sonar (PS) of AY- and PREVEZEClass Submarines. The main features of the hydrophone developed by Meteksan Defence with its own R&D resources are as follows: