Six European countries – Lithuania, Estonia, Croatia, Poland, the Netherlands and Romania – have united counter-cyber threat efforts in developing joint international rapid response capabilities. From now on, an international Cyber Rapid Response Team (CRRT) will be on standby across a number of physical sites, ready to respond to a cyber-attack immediately in case it occurred. 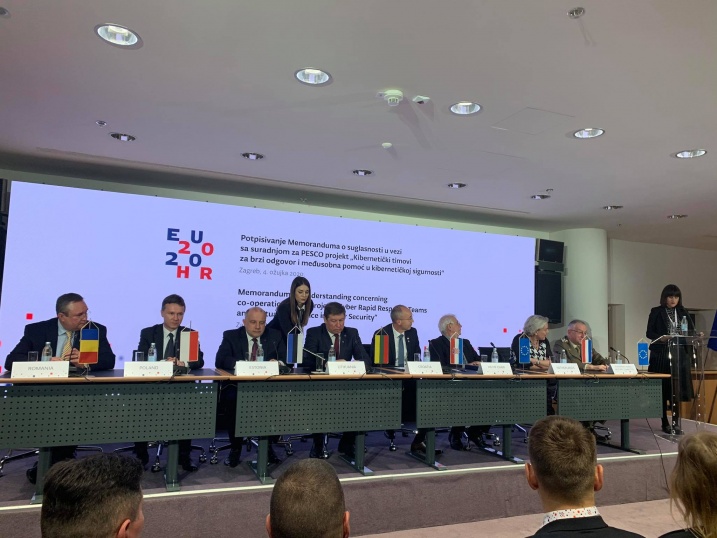 That has been finalised and agreed on 4 March in Zagreb, Croatia, in a Memorandum of Understanding. The document legally enables operation of such teams across jurisdictions of different countries, define the mechanism of CRRT operation, legal status, roles, and procedures. Formed by civilian and military experts, the CRRTs will join neutralisation and investigation of dangerous cyber incidents virtually or, if necessary, physically.

“This is a completely novel multinational cyber capability which was initiated and guided by Lithuania,” Minister of National Defence Raimundas Karoblis said after signing the Memorandum. “Every state faces cybersecurity challenges, we have to join forces because cyber warfare is ongoing and it knows no borders. It is also a concrete and clear example of EU countries contributing to a stronger European defence and supporting NATO defence and deterrence measures by non-military means.”

According to the Minister, creation of the CRRTs takes the EU countries’ cooperation in cyber area to a new practical level. European countries are not limited to national capabilities: the project enables easier information, HR, and scientific achievement sharing.

The CRRTs will be able to take preventive actions and carry out cyber-vulnerability assessments, as well as to assist European institutions and other member and partner countries. The project will also facilitate the ability to share best practices and will  to improve efficiency of using technological and human resources of the participating countries in the fight against cyber threats.

The agreement is Zagreb was signed by Ministers of Defence of Croatia, Estonia, Poland, Lithuania, Netherlands, and Romania. Seven more countries – Belgium, Greece, Spain, Italy, France, Slovenia, and Finland – are observers of the projects and expected to become full-fledged members soon.

Lithuania proposed formation of a rotational EU rapid cyber response forces in the Permanent Structured Cooperation (PESCO) framework back in 2017. “I am delighted that it has become the first actually implemented PESCO project,” R. Karoblis underscores.

PESCO is a EU initiative for developing modern military European capabilities and to facilitate cooperation among member states by joining in to projects and initiatives with an aim to strengthen EU capabilities to respond to emerging threats in Europe and neighbouring regions.

International transfers of major arms during the five-year period 2015–19 increased by 5.5 per cent compared with 2010–14. According to new data from the Stockholm International...

On 2 March, a joint Belarusian-British exercise began at the Losvido training centre of the 103rd Separate Guards Airborne Brigade in accordance with the International Military...

The second meeting of Iran-Azerbaijan joint commission was held at the headquarters of the Iranian Armed Forces on Wednesday. The meeting was chaired by Brigadier General...