Saab has performed the first metal cut for the two-seater fighter aircraft Gripen F, marking an important milestone in the programme. 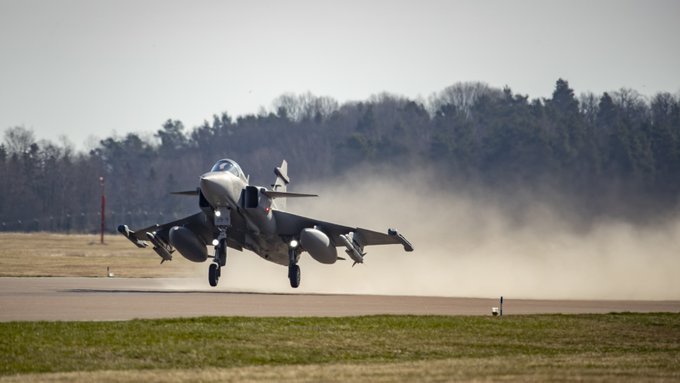 Gripen F is under development for the Brazilian Air Force (FAB) and shares the same advanced design and features as Gripen E, but with seat, displays and controls for a second crew member.  Gripen F has both a training mode for tuition of one crew member and a mode whereby the two crew members can share the workload with different display settings.

The first part was manufactured recently at Saab’s facilities in Linköping and is for the air duct section, just behind the cockpit of the aircraft.

“This milestone is important for the Gripen project because it demonstrates that the development phase is proceeding properly. This signals the beginning of the production of the two-seater aircraft, Gripen F, which is much anticipated by the Brazilian Air Force,” says Colonel Renato Leite, head of the Monitoring and Control Group (GAC-Saab) at the Brazilian Air Force.

The joint industrial programme on Gripen F is between Saab and the Brazilian partner companies Embraer, AEL Sistemas, Akaer and Atech. Currently, approximately 400 engineers are working with the development of Gripen F, mainly at Gripen Design and Development Network (GDDN) at the Embraer plant in Gavião Peixoto, São Paulo State, Brazil. Manufacturing will take place both in Sweden and in Brazil.

“Very effective teamwork among many dedicated people, both in Sweden and in Brazil, paved the way for this milestone on this new version of Gripen. These kind of milestones are special moments due to their rarity and that feels great,” says Jonas Hjelm, head of Saab business area Aeronautics.

Gripen F is also being offered by Saab to Finland for their fighter replacement programme.

Rosoboronexport and UralVagonZavod (UVZ), both part of Rostec State Corporation, have first demonstrated the combat capabilities of the 155mm Msta-S self-propelled howitzer....