The U.S. Army selected two performers executing under Other Transaction Authority for Prototype agreements for the design and testing of the Future Attack and Reconnaissance Aircraft Competitive Prototypes to continue into phase two of the program. 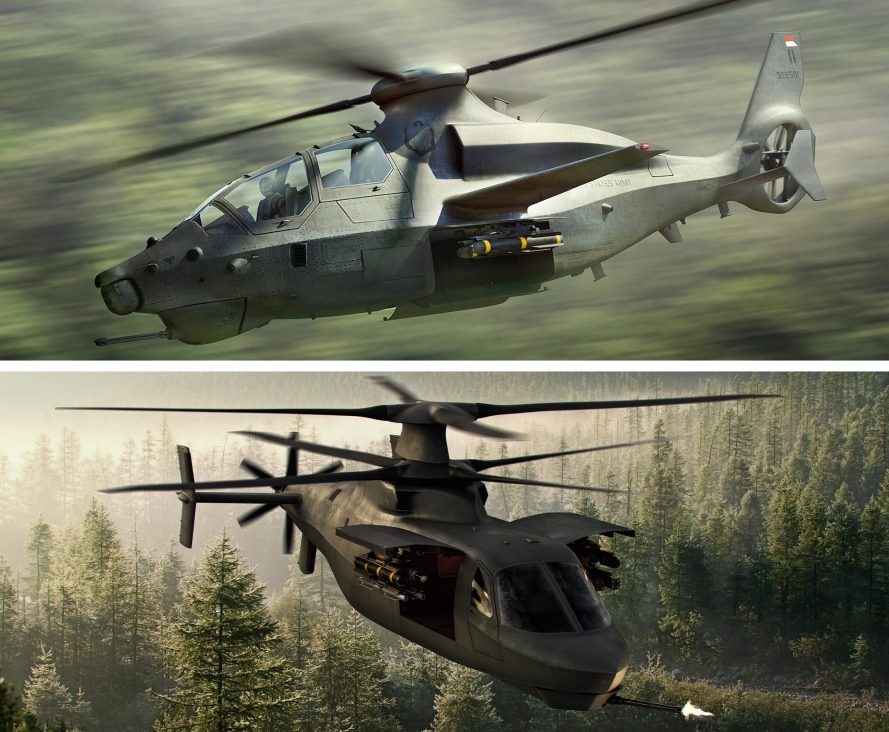 The Army requires an aircraft capable of operating in a complex airspace and degraded environments against peer and near-peer adversaries with an advanced integrated air defense system. The current aviation fleet does not possess a dedicated aircraft to conduct armed reconnaissance, light attack, and security with improved standoff and lethal and non-lethal capabilities from a platform sized to hide in radar clutter and for the urban canyons of mega cities.

“Our focus is on delivering capability for our Soldiers at the speed of relevance,” said Gen. John M. Murray, Army Futures Command commanding general. “We’re doing that here — providing opportunities for our industry partners to design, test, and build capability alongside our Soldiers to ensure that we win on a future battlefield.”

Army Futures Command along with Assistant Secretary of the Army (Acquisition, Logistics, and Technology), and Army Contracting Command leverage the OTAP agreements for prototyping through collaboration with industry.

In April 2019, five OTAP agreements for the aircraft design, build, and test of FARA were awarded for phase one. The five industry performers were AVX Aircraft Co. partnered with L3Harris, Bell Helicopter Textron Inc., The Boeing Company, Karem Aircraft, Inc. and Sikorsky Aircraft Corp. (Lockheed Martin). Phase one ended when the government conducted an initial design and risk review assessment with each performer and selected these two performers to continue into phase two.

Today’s decision transitions into phase two as the two performers will complete detailed design, build and test of their air vehicle solutions. This phase will end with a government flight test evaluation no later than the fall of 2023.

Bell Textron Press Release /Bell Textron Inc., a Textron Inc.  company, has been selected to continue its work on the U.S. Army’s Future Attack Reconnaissance Aircraft (FARA) program. As part of the selection, Bell is designing, manufacturing, and testing the Bell 360 Invictus, a prototype rotorcraft designed to provide improved lethality, survivability, and extended reach for Army Aviation. This selection follows almost a full year of design and risk-reduction work by the Bell team as part of the initial contract phase.

“The selection of the Bell 360 Invictus to continue in the FARA program builds on our decades-long legacy as an innovator in reconnaissance rotorcraft supporting the maneuver force,” said Mitch Snyder, president and CEO of Bell. “Our team has applied innovative thinking with tested technology to give the Army a low-risk option to fulfill its requirements on an aggressive schedule.”

As part of the U.S. government’s Future Vertical Lift (FVL) family of programs, the FARA competition seeks to test and acquire a next-generation attack reconnaissance aircraft to fill a critical capability gap identified by the Army on a rapid schedule. The Bell 360 addresses the requirements with a design optimized to achieve the performance, connectivity, sustainability, and reliability for soldiers to fight and operate in multi-domain operations. The aircraft is expected to meet or exceed the Army’s requirements, using proven Bell technologies such as fly-by-wire flight controls, a proven articulated rotor design, and an innovative blade design to name a few. Additionally, Bell is partnered with industry leader Collins Aerospace to integrate a new generation of avionics hardware and software featuring cyber-hardened and digital backbone solutions to provide MOSA compliance in accordance with US Army FARA objectives.

To ensure the team stays on schedule and on budget, Bell is using a digital design-as-built process. The team is able to connect and collaborate in a real-time digital environment to ensure alignment among all trades to facilitate smoother manufacturing, improve sustainability characteristics, and mitigate schedule risks. This process has been used and refined on Bell commercial projects, as well as during the recent U.S. Army Joint Multi-Role Technology Demonstrator program that produced the Bell V-280 Valor.

“The Bell 360 Invictus will help the Army achieve and sustain overmatch against competitors with its new attack and reconnaissance capabilities,” said Keith Flail, vice president of Advanced Vertical Lift Systems at Bell. “Our aircraft builds on Bell’s legacy of providing ultra-reliable scout rotorcraft by keeping our aircraft affordable with an emphasis on simplifying processes to achieve a sustainable and maintainable aircraft for the warfighters.”