Kazakhstan Paramount Engineering (KPE) concluded the contract with the Ministry of Industry and Infrastructural Development of the Republic of Kazakhstan to supply the Ministry of Defense with regular batch of armoured wheeled vehicles (AWV) -wheel configuration 4×4 Arlan. 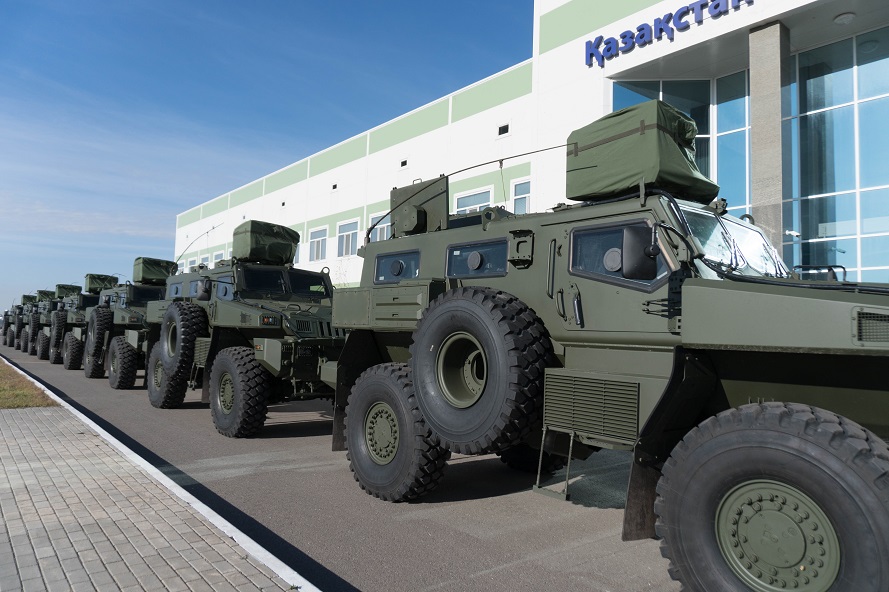 Armoured vehicles will be delivered to Kazakh Army in 2021. Armoured fighting vehicles are created according to MRAP technology (mine resistant ambush protected – protected from mine explosion and attacks from ambush) belonging to the Kazakhstan enterprise and they withstand the explosion of anti-tank bomb under the bottom (up to 8 kg equivalent to N of TNT).

This type of vehicle has been supplied to the troops for three years and still earns the trust of the army personnel. For example, demining activities in Arysi, where explosions occurred in ammunition depots, are carried out entirely using  Arlan AWV, which protects the lives of our soldiers.

The vehicles underwent all necessary tests and upgrades taking into account the requirements and wishes of the Ministry of Defense of the Republic of Kazakhstan, are equipped with all necessary equipment for the performance of combat tasks. AWV is equipped with automatic transmission, air conditioning, board computer and other systems for efficient, comfortable and safe work.

Also today there are factory and demonstration tests of the new AWV transport “Barys 8×8,” armoured vehicles wheel configuration 8×8, capable to withstand mine explosion under the bottom with a capacity of 10 kg equivalent to N of TNT.

Factory Design Bureau, KPE is completing the design of its proprietary vehicle “Alan 2” for Special Operations Forces. In the nearest future, the new vehicle will be represented to wide public.

Also design engineers of the company are at work upon a new model of fully-track infantry combat vehicle. The project is called “Mergen.”

Kazakhstan Paramount Engineering LLP is today a domestic base for provision of Special Operations Forces and the Ministry of Defense with new samples of modern equipment and inland arms.

Vehicles produced by Kazakhstan Paramount Engineering has a local content of 70%, which means that 70% of the proceeds remain in Kazakhstan and work for the economy of the country.

Highly qualified staff of the enterprise consists of 100% of Kazakhstani citizens, which indicates that taxes and other payments will go in for the budget of the Republic.

During a downturn, the support of the Ministry of Defense and the Ministry of Industry and Infrastructure Development to the domestic producer serves as excellent example of cooperation between state and national business, which will ensure qualitative rearmament and high-tech development of defense capacity for future decades.