STM, a company that stands out in the defence industry with the naval platforms, autonomous drone systems and cybersecurity solutions, has once again made to the Defence News Top 100, which is considered to be the most prestigious defence industry list in the world. 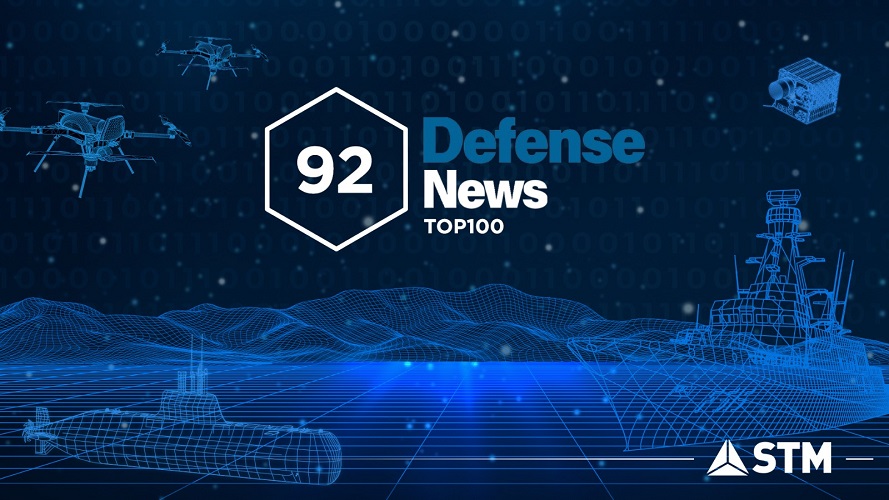 STM Savunma Teknolojileri Mühendislik ve Ticaret A.Ş. plays a critical role in Turkey’s defence industry and national technologies and shares its capabilities with friendly and allied nations. The company has been representing Turkey for three years in the global defence industry by currently entering to the Defence News Top 100 list, which features the most influential defence companies in the world.

STM, which is among the most influential companies in the field with its $485 million annual turnover and one of the seven Turkish companies in Defence News Top 100, carries out its activities with its qualified workforce in the fields of naval platforms, autonomous systems, cybersecurity, satellite and radar technologies, command and control systems, certification and consultancy. The company satisfies Turkey’s needs in the defence industry with its advanced technological products, and moves forward focusing on bringing competitive, innovative and smart technological solutions to the industry.

Drawing attention with its capabilities in the design, modernization and construction of naval ships, STM had also delivered the first four vessels with a local participation rate of 70 percent, to the Turkish Navy; one of the most active navies in the world and a member of NATO, within the MiLGEM Ada Class Corvette Project, as one of the main subcontractors. Building on its involvement in the MiLGEM programme, STM then became the main contractor in the I-Class Frigate project, again to meet  theneed of the Turkish Navy, and on schedule to start deliveries in 2023 with a minimum local participation rate of 75 percent. The company is also the main contractor in the Test and Training Ship TCG Ufuk, which will be Turkey’s first intelligence ship, and has assumed critical roles also in the submarine modernisation and construction projects of the Turkish Navy.

STM exports its capabilities and services to friendly and sister countries and has recently realized one of the largest naval ship export projects of Turkish defence industry. It is also the main contractor for the modernisation of Pakistan’s Agosta 90B (Khalid Class) Submarines, in addition to the Auxiliary Oiler Replenishment PNS MOAWIN. The latter being once again designed for the Pakistani Navy and built and delivered in Karachi, Pakistan.

Another member of the mini unmanned aerial vehicles (UAV) family developed by STM; KARGU (Autonomous Rotary Wing Attack Drone), which is able to operate autonomously, learn and decide, is effectively used by the Turkish Armed Forces (TAF) for border security, including international operations. STM is also the main contractor of the Kerkes Project, which will allow UAV platforms to operate independently of GPS.

As for cybersecurity, the company provides cyber threat intelligence services with its STM Cyber Fusion Center, a first in the country, which detects the threat before it occurs and prevents casualties.