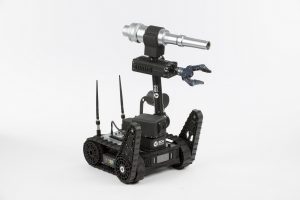 The first contract was awarded in France as part of SCORPION land vehicle acquisition program, which aims to modernize the capabilities of ground troops in collaborative combat. After conducting technical and operational assessments via three different bodies  (DGA TT, STAT and SIMMT) , the DGA (French Defence Procurement Agency) placed an order for 56 robots with NEXTER Group. As a part of this order, ECA GROUP will supply 38 CAMELEON LG robots, launched in early 2019.

Over the last six years, Canada has been using the COBRA MK2 mini ground robots produced by ECA Group. After assessing the technical and operational performance of several competitors, Canada also chose the CAMELEON LG for its mine-clearance missions. Alongside NEXTER, ECA GROUP will supply  the Canadian Department of National defense and Canadian Armed Forces with nine of these unmanned ground vehicles ( UGVs), and 4 as an option. The first delivery is scheduled for April 2020.

Today, Aeronautics Group has confirmed its flagship UAS, the Orbiter 4, has completed a record breaking 25 hour flight, a significant achievement for the platform. Last week,...