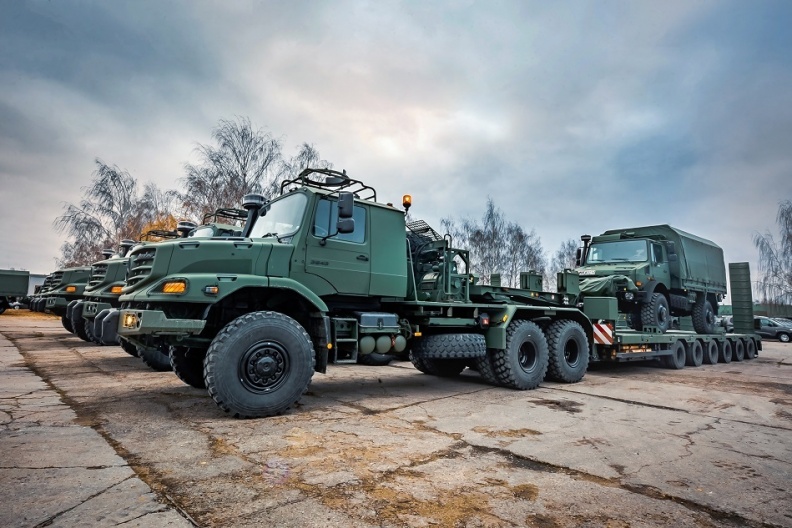 The newly procured ZETROS 3643 trucks with trailers are cargo transportation vehicles used for self-propelled PzH 2000 howitzers, Bergepanzer-2 armoured recovery vehicles, and other heavy and of non-standard dimensions military vehicles of the Lithuanian Armed Forces and NATO allies. The trucks are capable of transporting particularly large weights depending on the speed – up to 70 tonnes.

The contact on procurement the eight ZETROS 3643 tractor trucks with trailers was signed by the Defence Materiel Agency under the Ministry of National Defence in November 2018. The total value of the contract is approx. EUR 5.6 including VAT.

Another procurement for complementing and upgrading the Lithuanian Armed Forces vehicle fleet is 5-tonne payload Daimler AG UNIMOG U5000 tactical trucks, the bigger part of the total of 340 acquired trucks has been already delivered to the Lithuanian Armed Forces. Also, Mercedes-Benz ATVs, DAF trucks and road tractors, transport trailers, hitches, other vehicles of different roles bilaterally from the Netherlands Armed Forces on the basis of already signed contracts and a planned new contract.

Due to a significant and consistent financing the Lithuanian Armed Forces is currently intensely upgrading and updating infrastructure and weaponry in order to increase its combat power. The most important ongoing modernisation projects concern integration of the Vilkas/Boxer Infantry Fighting Vehicles and PzH 2000 self-propelled howitzers, improvement of air defence (NASAMS mid-range air defence system) and logistical, individual personnel provision, replenishment of the currently use systems (acquisition of the JLTVs, etc.).