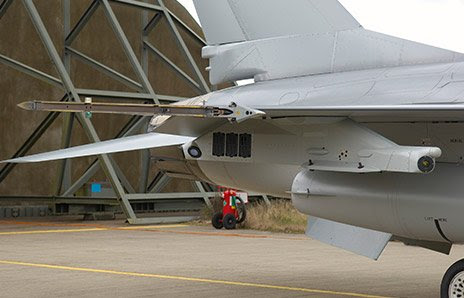 The NATO Support and Procurement Agency (NSPA,) has recently awarded a contract of an estimated value of EUR 74 Million (84M USD) to Terma Denmark, for its customer U.S.N.G and the F-16 System Program Office (SPO).

The US ANG PIDSU and EW core pylon configuration is the most advanced variant as both left- and right-hand pylons are equipped with three chaff/flare dispenser magazines. This was made possible by introducing a new compact variant of the Terma Digital Sequencer Switch which allows installation of the additional dispenser magazine. Once implemented all the existing and new ANG Terma-pylons will feature flare dispense and EW core pylons will even have all hardware for smart dispense of e.g. Expendable Active Decoys and multi-shot flares.

The threat scenario, especially when operating from deployed bases, is shifting towards increased IR threats – not least MANPADs. The PIDS was originally designed for Chaff Dispense, but a Flare Dispenser Modification Kit (Flare-Up) comprising special magazines and a modified Breech plate will allow dispense of flares from the PIDS versions.

The program will be executed through the Terma Aeronautics business area with facilities in the U.S. as well as in Denmark.

Business Development Director John Rygaard says: “This program will potentially pave the way for additional export contracts from other F-16 countries. The European F-16’s are already equipped with PIDS+.”

Terma has been providing pylon-based solutions for improved self-protection at a cost-effective price since 1988 in several different configurations for fighter aircraft and can be customized based upon specific requirements.

More than 1,000 new as well as modified/retrofitted pylons for the F-16 with EW capabilities have been produced.