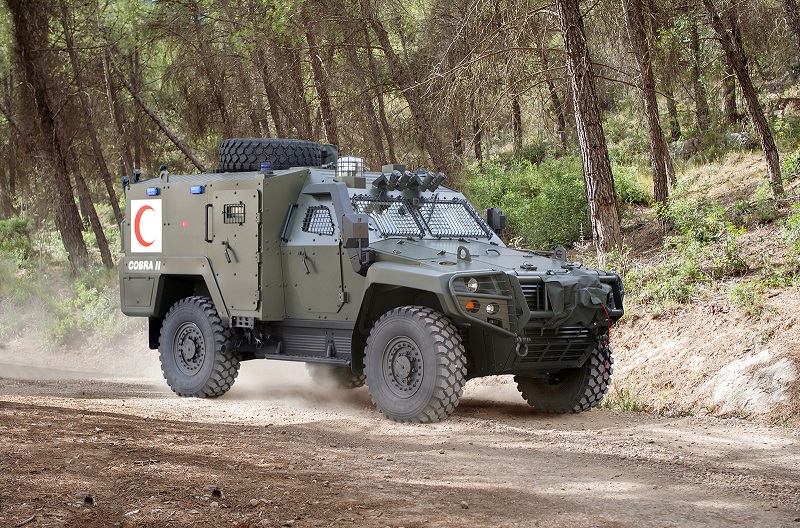 Pointing out Otokar’s broad land systems product range from 4×4 to 8×8, and from tracked armoured vehicles to turret systems Otokar General Manager Serdar Görgüç said, “With the armoured vehicles we develop using next generation technologies, we primarily target to meet the needs and expectations of our users considering present and future threats. In the last 10 years, we have allocated 8.5 per cent of our revenues for our R&D activities. Our combat-proven vehicles are actively used in conflict zones in very different geographies and extreme climatic conditions. Currently, more than 32 thousand Otokar vehicles are operated in over 35 countries, one of which is Bahrain. We are very proud to be here and meet with our clients in BIDEC, again.”

Emphasizing Otokar’s strong presence in Gulf region, Görgüç continued: “GCC countries are particularly important for Otokar. Different types of Otokar military vehicles are successfully serving the requirements in the region with different users since early 2000s. Otokar is no longer a supplier in the region but also stands out as an investor establishing engineering and manufacturing capabilities. With the establishment of Otokar Land Systems in 2016, we became much closer to our present and potential users. We aim at extending collaborations in the region and also look for new opportunities.”

Several functions related to the ambulance capabilities of the vehicle can be controlled by medical personnel in backwards sitting jump seat while the front and rear compartments can be isolated from each other when needed. COBRA II medical evacuation vehicle’s patient layout is for 3 patients either as ‘2 sitting and 1 on stretcher’ or ‘2 on stretchers’ which can be configured by the crew. Except for patients the vehicle has space for a driver, commander and medical personnel in each version.

URAL has been designed to meet the current and future requirements of its users. Featuring outstanding mobility and high level of protection, URAL has been designed to meet paramilitary users’ needs for high-capacity armoured vehicle, also taking into account driving and personnel comfort. The specially developed suspension allows high level of comfort for the personnel, while offering the driver easy and ergonomic drive. Featuring five doors and different layouts, URAL offers fast and easy access in an out of the vehicle, and ergonomic internal volume.

Otokar’s multi-wheeled modular armoured vehicle ARMA 6×6 serves successfully in Bahrain. ARMA 6×6 offers superior mobility, high mine and ballistic protection, as well as medium and high-calibre weapon system integration options. Offering high tactical and technical capabilities, ARMA comes with an optional amphibious version for operations in the most demanding terrain and climate conditions. ARMA 6×6 stands out especially with its high payload capacity and large internal volume. ARMA can be equipped with different weapons and turret according to the needs. The ARMA family can be used for different missions as an armoured personnel carrier, armoured combat vehicle, command control, CBRN reconnaissance vehicle while different weapon systems can be integrated into the vehicle.