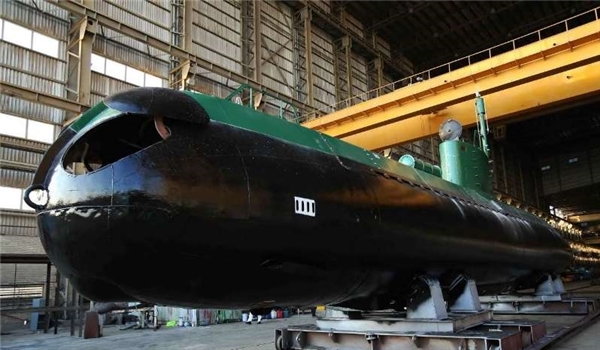 An overhauled Ghadir-class submarine joined the Iranian Navy’s flotilla in the Southern port city of Bandar Abbas to enhance the maritime capability of the Army in the Strategic Persian Gulf region.

The Ghadir-class submarines, first unveiled in 2018, are designed to cruise within the shallow waters of the Persian Gulf to ensure peace and security of Iran’s maritime borders.

The submarine is 29 meters long and has the cability to fire torpedoes from two front sides, release a variety of minesweepers, carry commandos and launch missiles.

Meantime, on April 5, Head of the Marine Industries Organization of Iran Rear Admiral Amir Rastegari announced that the country will build a 6,000-ton destroyer soon, and said it has the ability to produce nuclear-powered submarines.

Commander of the Iranian Navy’s factories Rear Admiral Abbas Fazelnia said that the country’s home-made Qadir-class submarines cannot be discovered and traced by enemies.
“The strong point of Qadir-class submarine is its little dimensions which cannot be tracked and traced and it can pose a big threat to the enemy with its smart torpedos,” Rear Admiral Fazelnia said.

Ukrainian tests of the “Neptune” cruise missile system were held