NATO’s future fleet of multi-role aircraft (MMF) is marking an important milestone on 30 June 2020, as the first of the eight aircraft in the fleet landed at the main operating base in Eindhoven, the Netherlands. The aircraft, an Airbus A-330, arrived from the production facility in Getafe (Spain). 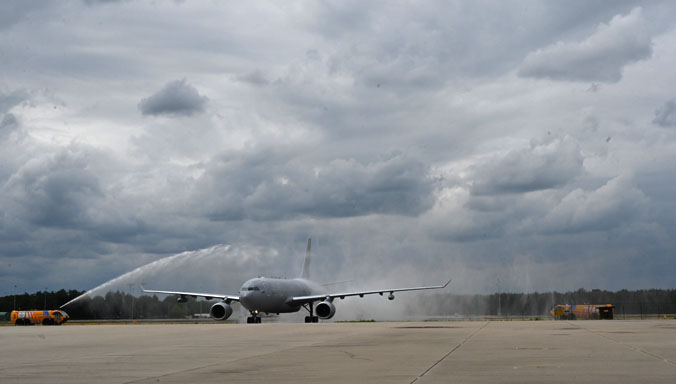 The Multinational Multi-Role Tanker Transport (MRTT) fleet will provide strategic transport of people and cargo, will enhance substantially European air-to-air refuelling capabilities, and will be available for medical evacuation, if needed. Six NATO Allies have pooled resources to make this initiative possible – Belgium, the Czech Republic, Germany, Luxembourg, the Netherlands and Norway. This effort has been supported by NATO and the European Union, and is an example of effective cooperation between the two organisations when delivering critical capabilities for their members.

“The MRTT fleet’s versatility in providing several critical capabilities simultaneously is nothing short of impressive. The aircraft can help respond to crises such as the COVID-19 emergency, by moving medical supplies and conducting medical evacuations. However, the fleet will probably have the most profound impact within the air-to-air refueling mission, an area where historically many European Allies have lacked capacity. Therefore, the MRTT fleet will help contribute to a fairer transatlantic burden-sharing at NATO. It is also a successful pilot multilateral cooperation project, bringing together a number of Allies and multiple NATO and EU institutions and agencies in support of the delivery of a major capability,” said Camille Grand, NATO Assistant Secretary General for Defence Investment.

“This is a prime example of European defence cooperation done in close coordination with NATO, which shows that once a capability shortfall has been jointly identified, European nations can pull together, work on a common project aimed at filling the gap, and eventually deliver – as they do with today’s delivery of the first aircraft. It’s Pooling & Sharing at its best,” said Jiří Šedivý, Chief Executive of the European Defence Agency.

The second aircraft is scheduled for delivery by the end of July 2020, and the rest of the fleet will follow until the end of 2024. The full fleet will consist of eight Multi-role tanker transport aircraft, with an option to extend the contract up to 11 aircraft in the future. The aircraft are owned by NATO and managed by the NATO Support and Procurement Agency with the support of the Organization for Joint Armament Cooperation.

The aircraft will be operated by a multinational unit, comprising of military personnel of the participating countries. The unit is based in a Main Operating Base in Eindhoven, which will host five aircraft, and a Forward Operating Base in Cologne-Wahn (Germany), where the rest of the fleet will be stationed.