Press Service of the Azerbaijan National Agency for Mine Action (ANAMA) reports that the Agency cooperates with a number of international organizations in the sphere of humanitarian mine action.

Marshall Legacy Institute (MLI) is one of these organizations which operates under the auspices of the US Department of State. 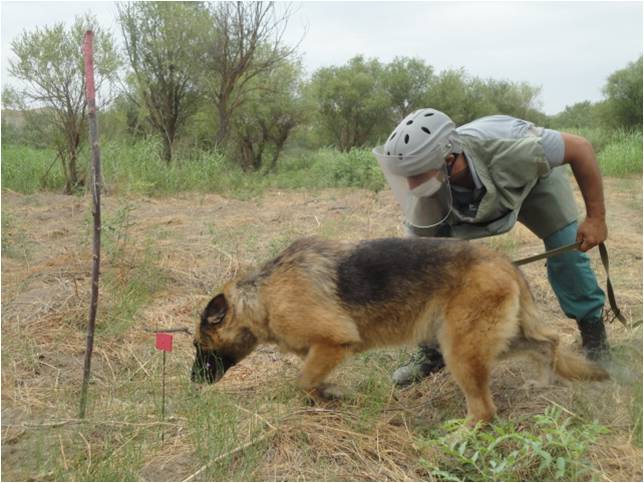 ANAMA has been cooperating with the US Marshall Legacy Institute since 2005. With the support of the US Department of State and donors, Marshall Legacy Institute has donated 36 mine detection dogs and 4 explosive detection dogs (that participated in the peacekeeping operations within the framework of anti-terror exercise in Irag) to Azerbaijan mine clearance programme. Donated MDDs were accredited accordingly and were involved in special training sessions.

Mine detection dogs involved in mine clearance programme in Azerbaijan were participated and trained in special anti-terror operations in Afghanistan, Irag and other hotline regions.

US based MLI conducts annual competition sessions for the MDDs that demonstrate high professionalism and prove themselves in due course. Award of the year 2020 was dedicated to ANAMA’s mine detection team of Mr. Logman Namazov and his partner MDD named Kora (originated from Germany) for their excellent team work and invaluable efforts contributed to save lives.

Starting from 2014 KORA was participating in mine clearance operations in different regions of Azerbaijan: Agcabedi, Aghdam, Terter, Fizuly, Goranboy, Gabala, Gazakh and Aghstafa regions, where she searched more than 321 683 sq. m territory and detected dozens of bullets and fragments, 5 pieces of anti-personnel and 3 pieces of anti-tank mines, as well as 2 anti-personnel mines.  32 families, 8 schools and 2100 people benefited from the hard work efforts of this dog. KORA participated in the clearance process of 38 farms and 17 pastures. Although she is already 9 years old, KORA is not far behind the young MDDs in this field.

It has been a regular exercise for many years that Marshal Legacy Institute (MLI) organizes special gala event dedicated to the award granting ceremony for the winners.

Due to Covid-19 pandemic MLI will organize mentioned event on line this time and ANAMA will present specially produced video describing activities of MDDs throughout mine clearance operations as well fragments from their daily lives.