We have achieved a historic success in manufacturing the bow section (Torpedo Section) housing the torpedo tubes for the first time in Turkey, joining the few countries in the world having such capability.

Another critical stage has been completed in the Turkish Navy New Type Submarine Project, launched by the 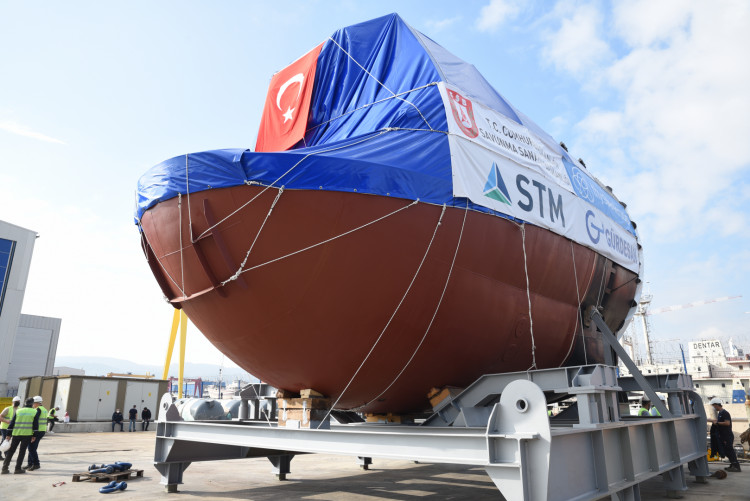 Presidency of Defence Industries (SSB) for the Turkish Naval Forces Command. The bow section (Torpedo Section) housing the torpedo tubes is produced for the first time in Turkey using indigenous and national means, in Gürdesan Company with engineering and coordination services provided by STM. We delivered the first Torpedo Section produced for Reis class submarines to Gölcük Naval Shipyard on 13 September 2021, transported by sea from the Gürdesan premises in Yalova. The first Torpedo Section produced and delivered using national resources, will be integrated into TCG MURATREİS, the 3rd submarine of NTSP. The localization of Torpedo Section represents a significant experience gained on the course of Turkey’s National Submarine Project.

Three more Torpedo Sections to be delivered by March 2022

The production of the Torpedo Section for the 3rd ship, the first one to be delivered, began in 2018. Under the coordination of STM, Turkey’s leading engineering company in the field of naval platforms, the nozzle holes of the said pressure hull were machined and the tube penetration welds were made. Following the painting and assembly processes, the Torpedo Section was expeditiously and successfully completed the acceptance tests with zero defect. The Torpedo Section of the 4th, 5th and 6th submarines in the project are to be delivered by March 2022.

Torpedo Section is the most critical part of the Reis class submarines, the most cutting-edge submarine platforms of the Turkish Navy, and contains the main armament of the submarine, as well as the systems enabling the firing of torpedo/guided missiles. The Torpedo Section enables Reis Class Submarines to be armed with eight 533mm torpedo tubes. The delivery of six Reis Class Submarines to be initiated as of 2022 as part of the project. The section containing the torpedo tubes of the first two submarines was manufactured by the German ThyssenKrupp Marine Systems (TKMS), the main contractor of the project. The Torpedo Sections to be fitted into the 3rd, 4th, 5th and 6th submarines are being produced for the first time in Turkey at the Gürdesan Company, with STM as the main subcontractor.

Otokar to exhibit TULPAR and COBRA II MRAP at DSEL 2021