The Qatari landing ship Al-Abrar Fuwairat before it was launched at Anadolu Shipyard in Istanbul. (Qatari Ministry of Defence) 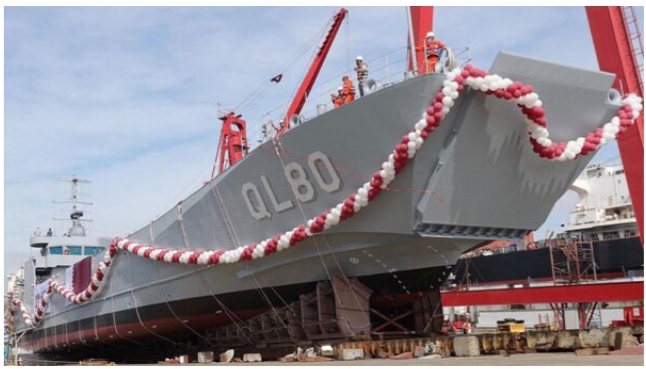 The Qatari Ministry of Defence (MoD) identified the vessel Al-Abrar Fuwairat , saying it is an LCT80-type landing ship, and added that the launch ceremony was attended by QENF commander Major General Abdullah bin Hassan al-Sulaiti and his Turkish counterpart.

The two commanders also inspected Al-Doha , the first of two training ships Anadolu Shipyard has built for the QENF.

The shipyard has already built eight LCT80s for the Turkish Naval Forces, but this is the first export order for the type.

Turkey’s Maritime Magazine reported that the landing ship is the largest of four vessels that were ordered for the QENF from Anadolu Shipyard in 2020, the others being two LCM40s and one LCVP.

Aselsan has been adapting the Sarp remote weapon station (RWS) with the capability to fire the Atom 40 mm high-velocity airburst munition, the company reported in its January...

According to information published by the TOLGAOZBEK website, Turkish company Roketsan has exported TRG-230 surface-to-surface missile to Bangladesh. According to open sources...

According to a Tweet published by Ismail Demir, President of the Turkish Defense Association (SSB), Turkey has conducted final firing tests with its home-made HISAR-O+ air...