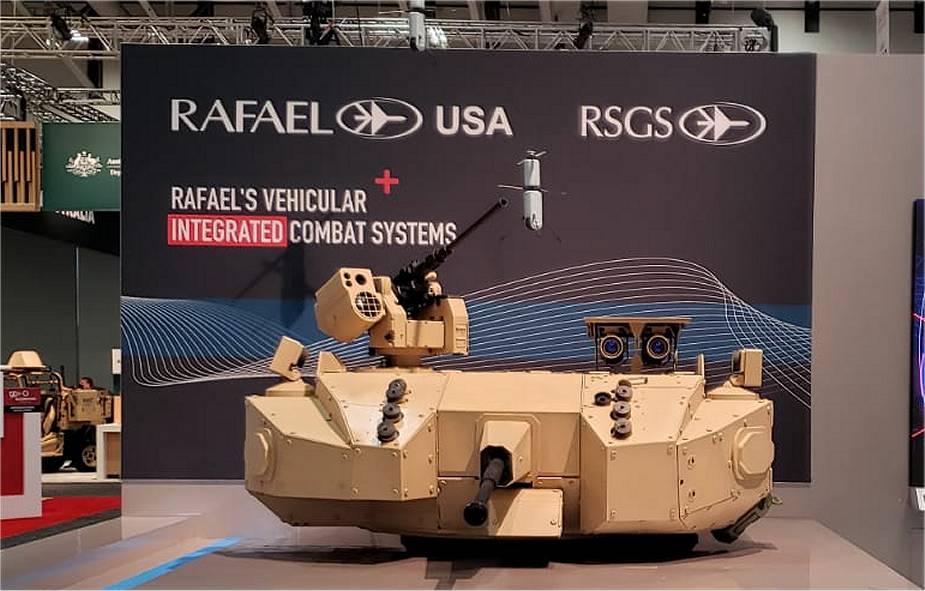 With a combination of the world’s most cutting-edge, reliable, and effective solutions the SAMSON 30mm Integrated RWS (Remote Weapon Station) is designed to address the threats of the modern battlefield.

The SAMSON RWS is equipped with hostile fire detection capabilities and the ability to rapidly and effectively return fire via a fast, accurate slew-to-cue mechanism. It also includes a unified user interface for all subsystems, an inherent hatch for close situational awareness, and under-armor ammunition loading that increases lethality. These capabilities enable the SAMSON to turn a light vehicle into a lethal powerhouse on par with a main battle tank.

A key element of SAMSON’s lethality suit is its integration of the SPIKE LR 1 & 2 multi-purpose guided missiles, and its full collaboration TROPHY Active Protection System (APS), two of Rafael’s most groundbreaking solutions. These allow the RWS to provide unparalleled maneuverability, lethality, and survivability. With a SAMSON turret, a vehicle is always at the ready, always on the attack, and always able to stop and respond to threats.

The SPIKE LR II is an advanced state-of-the-art lethal 5th generation multipurpose, multi-platform missile, designed for modern warfare with almost full commonality to the SPIKE Missile
legacy. For increased lethality, SPIKE LR II includes two unique state-of-the-art advanced and highly capable Warhead configurations: a Tandem HEAT warhead configuration, enhancing the armor penetration capability of the SPIKE missile by more than 30%, and a new multipurpose blast warhead, which includes controlled fusing (by the gunner) for control of the desired effect. The SPIKE LR II missile has a maximum firing of 5.5 km from a ground station and 10 km from a helicopter.

The SAMSON is a sibling of Rafael’s MCWS (Stryker Medium Caliber Weapon System) that was a key element of Oshkosh Defense’s winning proposal to up-gun the US Army’s Strykers for today’s threats.

According to information published by the Russian press agency TASS on November 11, 2021, Russian President Vladimir Putin has announced the delivery of the new S-550 air...

Today’s defence scenarios require absolute dominance of the airspace, irrespective of the threats and the operational complexity. The need for Integrated Air and Missile...

According to information published by the “Defence & Technology” website on November 9, 2021, the ARMA 8×8 armored vehicle fitted with the Nefer unmanned...