The HK433 is a new generation of 5.56mm assault rifles developed and produced by the German company Heckler & Koch. This rifle is one of the candidates to replace the G36 in service with the German armed forces. It is a modular assault rifle chambered for 5.56×45mm ammunition which combines features of the G36 and the HK416 families of assault rifles. 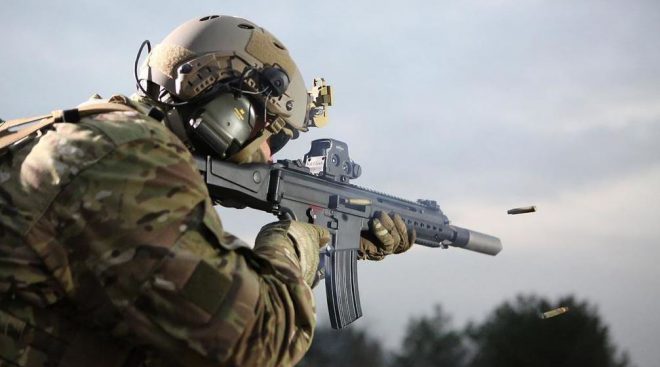 The HK433 gives the shooter six different barrel length options, allowing him to adjust the weapon to the particular operational need. As standard, the barrels are equipped with a further-developed and tool-less adjustable gas port for sound suppressor operation and an interface for the 40 mm grenade launcher HK269 and the GLM/GLMA1. A front sight interface and bayonet holder can be mounted on the barrels as an option. All barrels can be replaced at the operators and maintenance level.

The replaceable lower receiver defines the desired operating concept, thus reducing the training expenses for the shooter. Depending on the shooting training, the shooter can choose between a G36 and an HK416/ AR-15 operating concept. All operating elements are attached on both sides, arranged symmetrically, and can be customized. „Drop-in“solutions of the lower receiver extend the range of functions of the weapon with respect to match triggers or trigger assembly combinations.

The Slim Line handguard is positive-locking and connected to the upper receiver free of backlash. It can be removed without a tool and offers to carry sling fixing points, modular HKey interfaces on 3 and 9 o‘clock as well as a continuous MIL-STD-1913 Picatinny rail on 6 o‘clock.

The upper receiver has a built-in maintenance-free round counter. The weapons data can be transmitted and archived wireless. The round counter requires no energy supply. Data is read using RFID technology. The grip interface is designed similarly to the HK416 weapons family. Pistol grips with exchangeable grip shells and back straps similar to the P30 and SFP/VP series of pistols are optionally possible.

The ergonomically foldable and length adjustable buttstock with height-adjustable cheek rest is free of backlash and connected to the receiver. The length adjustment has five locking positions, allowing it to be adjusted dynamically to the personal protective equipment of the shooter. Moreover, the buttstock can be folded to the right in each locking position. Even though, the trigger always remains freely accessible. The case ejection port is not covered, ensuring the ability to defend in an emergency in the transport mode.

The magazine well according to NATO STANAG 4179 (draft) ensures interoperability of the G36 weapon systems with HK conversion magazine well, the HK416, and the commercially available AR-15 platforms.