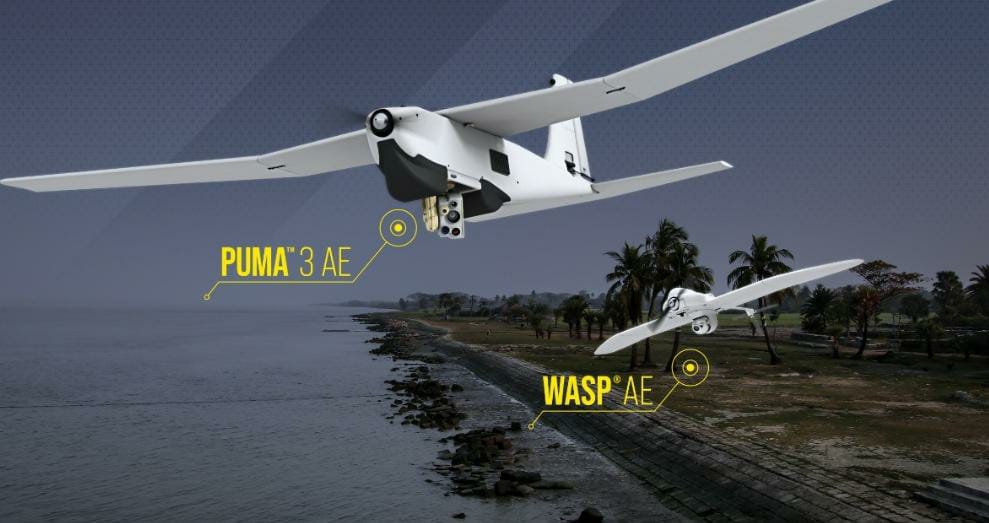 AeroVironment’s Puma 3 AE unmanned aircraft system is designed for land and maritime operations. The hand-launched Puma 3 AE has a wingspan of 9.2 feet, weighs 15 pounds, and can operate for up to 2.5 hours. The aircraft also has a range of 12.4 miles (20 kilometers) with a standard range antenna, up to 24.9 miles (40 kilometers) with AeroVironment’s Extended Range Antenna (ERA) and up to 37.2 miles (60 kilometers) with AeroVironment’s Long-Range Tracking Antenna (LRTA). It also features reduced system packaging with a flyable configuration and Ground Control System (GCS) in one case. Capable of landing in water or on land, the all-environment Puma 3 AE and Mantis i45 EO/IR sensor suite empowers operators with extended flight time and a level of imaging capability never before available in the small UAS class.

Wasp AE is a lightweight, man-packable UAS that weighs just over a kilogram and delivers best-in-class capabilities for an unmanned aircraft system of its size, including stealthy maneuverability, superior imagery, encrypted video, and exceptional ease of use. Wasp’s gimbaled payload is mechanically stabilized, enabling it to transmit advanced imagery in high-wind conditions, while its advanced avionics allow operators the option of manual or autonomous navigation.

AeroVironment’s small UAS comprises the majority of all unmanned aircraft in the U.S. Department of Defense (DoD) inventory, and its rapidly growing international customer base numbers more than 50 allied governments.

US Army will use creepy robots in subterranean environments