According to pictures published on the Twitter account of Ronkainen on April 8, 2022, the Australian-based company EOS has demonstrated the integration of its R800S remotely operated weapon station fitted with an EchoGuard 3D radar, mounted on the new AMPV (Armored Multi-Purpose Vehicle) that will replace the M113 family in service with the U.S. Army. 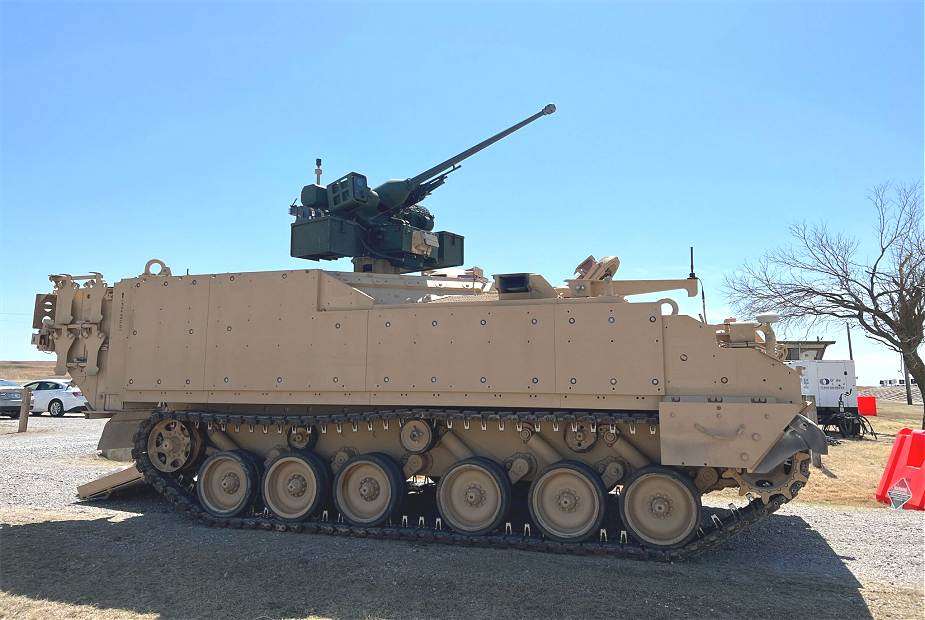 With its R800S remotely operated weapon station mounted on an AMPV (Armored Multi-Purpose Vehicle), the Australian-based company would like to demonstrate a new C-UAS (Counter-Unmanned Aerial System) solution armed with one Mk44S 30mm Bushmaster automatic cannon and fitted with an Echodyne’s EchoGuard 3D radar used to detect and track drones.

The Armored Multi-Purpose Vehicle (AMPV) is a family of tracked armored vehicles designed and developed by the company BAE Systems to replace the Vietnam War-era and legacy M113 tracked Family of Vehicles in service with the U.S. Army. The first batch of AMPVs wee delivered to U.S. Army 2nd Armored Brigade, Third Infantry Division at Fort Stewart for initial operational testing in January 2022.

The R800S is a new generation of remote weapon stations designed and developed by the company EOS. The standard configuration of the R800 is armed with one Northrop Grumman Bushmaster Mk44S 30mm automatic cannon, one M240B 7.62mm machine and anti-tank launchers for American-made Javelin re-and-forget anti-tank missile or Spike Israeli anti-rank guided missile.

The EchoGuard is an ultra-low SWaP ESA radar that detects and tracks drones in unauthorized areas. EchoGuard rapidly and accurately slews other sensors such as PTZ optical cameras for continuous eyes-on-object, even at high zoom levels and while tracking fast-moving targets.

The EchoGuard radar has been designed to be easily integrated with other sensors and existing video management systems (VMS). It has a field view of 120° in azimuth and 80° in elevation, and can simultaneously track 20 aerial targets.