British 16 Air Assault Brigade Combat Team is relishing the opportunity to be the first Robotics and Autonomous Systems (RAS) enhanced brigade, complete with futuristic, mechanical dogs, the British Army reports on its website.

Step forward the robotic ‘Ghost V60 quadruped’! The Ghost is the latest tool in the ever-expanding tool chest of the 16 Air Assault Brigade Combat Team, the British Army’s global response force. The BCT is specially trained and equipped to deploy by parachute, helicopter and air-landing. Its core role is to maintain and command the Air Manoeuvre Task Force (AMTF) which is made up of infantry and aviation battlegroups held at very high readiness to move. 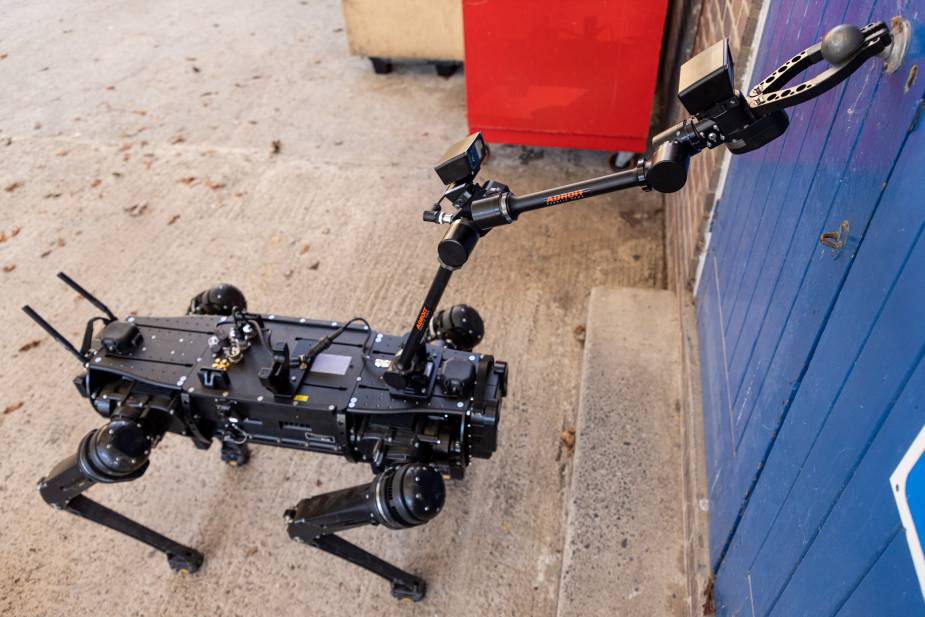 Developed by Ghost Robotics, this go-anywhere robotic canine, based on the biomechanics of the dog, is the equivalent of a Swiss army knife. You can swap its legs and add arms as the need or challenge dictates. Described as a ‘mid-sized high endurance agile and durable all-weather ground drone’ the robot is not autonomous: it is at all times under the control of an operator using a control pad that most people would recognise as it looks and behaves not unlike a gaming controller.

Already in trials with the U.S. Homeland Security to assist in patrolling the USA’s southern border and other defence forces, this new and exciting piece of kit will provide increased situational awareness which is vital in planning and developing effective stratagems.

No longer does the Army with the biggest or fastest piece of kit win the battle. In an age of ‘360-degree warfare’ software not hardware will give you the tactical advantage. With tactical advantage comes greater understanding, increased accuracy in identifying and acquiring targets which ultimately leads to increased lethality.

16 Air Assault Brigade Combat Team is relishing the opportunity to be the first Robotics and Autonomous Systems (RAS) enhanced brigade; Deputy Commander of 16 Air Assault Brigade Combat Team, Colonel James Loudoun said: ‘’It is a fantastic opportunity for the team to be at the forefront of the Army experimentation with Robotics and Autonomous Systems. Airborne forces were created as an innovation and we have maintained an innovative and open-minded approach to how we operate so that we can achieve the best with what we have. We are light forces and expect to operate at reach with limited resources and support, so we will embrace any way that we can use technology on the battlefield to support our soldiers and improve overall capability’’.

With things like thermal imaging, you are able to attach ‘LIDAR’ so you’d be able to map out a 3D image. So, commanders would be able to assess the dangers and mitigate those moving forward. The sole purpose of a piece of kit like this is to keep soldiers out of danger.