Within the framework of the current four-year development plan Estonian Ministry of Defence is set to acquire two force protection patrol boats built by an Estonian company Baltic Workboats AS, as a result of which up to 50 people will be employed until the end of the year on the island of Saaremaa, which is one of the most suffered regions in Estonia due to COVID-19 pandemic. 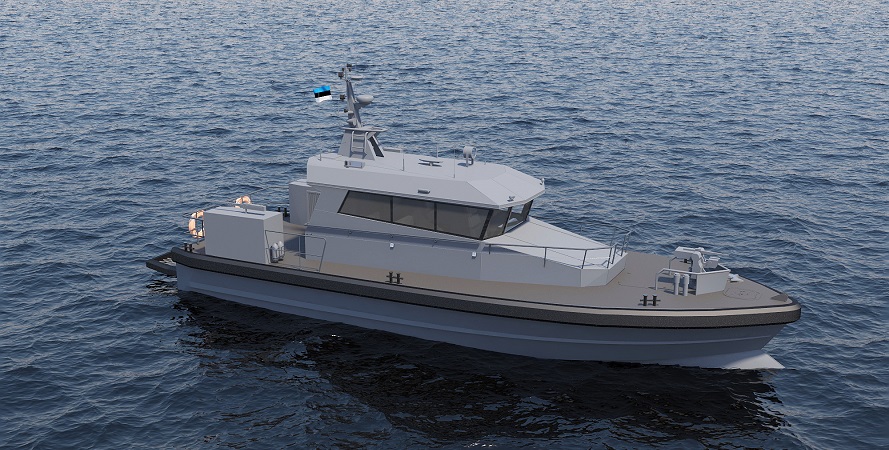 ‘In the broader sense, the acquisition of new equipment sends a strong signal that we will continue the development of our national defence, which simply cannot be paused even in the middle of a crisis. However, it is important that we are also able to provide support in this way to the country’s economy and people as they emerge from the crisis,’ said Minister of Defence Jüri Luik, according to whom the acquisition of the patrol boats will, in particular, enable to fill smaller naval capability gaps, something that has been needed for many years.

The main function of the patrol boats is to ensure force protection, at sea and in ports, of NATO and Partner naval vessels visiting Estonia. The boats can also support in other tasks as identifying foreign vessels, commanding units at sea, conducting exercises, securing live-fire exercises, providing navigation practice for the cadets, as well as support other state agencies, especially the Police and Border Guard.
Baltic Workboats AS has nearly 20 years of experience, similar type of patrol boats will also be built for the Omani police.

‘This is a very important contract for us at a very complicated time, and we are very grateful that the Estonian state took such a bold step and turned directly to a local builder. Orders of this type create a much-needed reference for us, allowing us to participate in defence industry procurements in other parts of the world and thereby increase Estonian exports,’ said Margus Vanaselja, Chairman of the Management Board of Baltic Workboats AS.

The patrol boats are 18 metres in length, have partial ballistic protection and are equipped with two 12.7 mm heavy machine guns. A remote-controlled weapon position can be added if necessary. The patrol boats have a top speed of over 30 knots. The boats are scheduled to be completed by the end of this year and enter into service with the Navy in 2021. The transaction is valued at EUR 3.9 million.