JSC Rosoboronexport (part of the Rostec State Corporation) is organizing a unified Russian exposition at the International Exhibition of Weapons Systems and Military Equipment KADEX 2018. The show will be hosted by an airbase of the Armed Forces of the Republic of Kazakhstan near Astana on May 23-26. 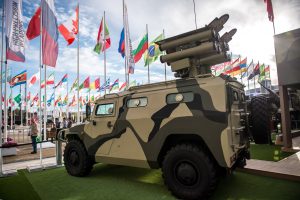 The company is participating in the exhibition on invitation of the Minister of Defence and Aerospace Industry of the Republic of Kazakhstan.

“Rosoboronexport has already become a traditional participant of KADEX. Every time our delegations work quite effectively here. This year we are presenting over 300 items of the Russian military equipment, which include some new products. I am confident that our proposals will receive well-deserved attention from the representatives of the Armed Forces of Kazakhstan and other countries participating in the exhibition,” said Alexander Mikheev, Rosoboronexport’s Director-General.

The exhibition is designed for representatives of all services of the armed forces. The thematic scope of the exhibition includes aviation equipment, unmanned aerial vehicles and space technologies, armaments and materiel of land and naval forces, air defence systems and equipment, logistics and technical support of troops, IT-technologies, communications systems and assets, robotics in the military domain.

As many as 11 Russian holdings and their 18 integral enterprises are participating in the unified Russian exposition. Rosoboronexport is presenting its promoted products at exhibit № 506. In the margins of the exhibition the company will organize a number of presentations of military equipment and materiel for foreign customers.

Special attention of the representatives of the Land Forces of Kazakhstan will be attracted by the new samples of firearms and training equipment for firearms and armored vehicles. Besides, the attention of customers is expected to be drawn by the new exported armored personnel carrier BT-3F, special purpose vehicle ‘Tigr-M’ and other pieces of armored equipment. It includes, in particular, the ‘Terminator’ tank support combat vehicle, which has proved its excellent combat and operational characteristics during the anti-terrorist operation. The Russian trucks ‘Ural-4320’ and ‘Ural-432009’ will be displayed at the static ground of the exhibition.

The most promising products for the air force in the regional market are the supermaneuverable multipurpose fighter of the Su-30SM type, combat trainer Yak-130 and military transport Il-76MD-90A, transportation and combat helicopter Mi-35M, military lift helicopter Mi-171SH, as well as the Ka-226T light multipurpose copter, designed for the 24-hour operation. In addition to that, the attention is expected to the Russian unmanned aerial vehicles ‘Orlan-10E’ and ‘Orion-E’, the latter being the very new item in Rosoboronexport’s catalogue.

Rosoboronexport will demonstrate in Astana a variety of air defence and electronic warfare systems. In particular, the most promising for the regional armaments market are the ‘Resonance-NE’ radio station on long-distance detection of low-signature aerial objects, ‘Buk-M2E’ and ‘Tor-M2E’ air defence missile systems and the ‘Pantsir-S1’ air defence missile-gun system.

The business program of the exhibition will include planned meetings between the members of the delegation with Rosoboronexport’s partners from the law-enforcement agencies of Kazakhstan and other countries participating in KADEX-2018.

IDEF 2021, 15th International Defense Industry Fair, hosted by the Ministry of National Defense, under the management and responsibility of the Turkish Armed Forces Foundation,...

KADEX is the largest multi-profile congress and exhibition event of defence, aerospace and cyber security industries in Central Asia. It is the best regional platform for...