On November 21 the Defence Materiel Agency under the Ministry of National Defence and the U.S. Department of Defence signed the Letter of Offer and Acceptance concerning procurement of 200 units of the Joint Light Tactical Vehicle (JLTV). The signature was the culmination of the efforts of the Ministry of National Defence to supply the Lithuanian Armed Forces with high quality product for the best value for money. The new tactical vehicles will strengthen the present capabilities of the Lithuanian Armed Forces, increase mobility, personnel protection and combat power. Lithuania is purchasing the JLTVs from the U.S. Government that chose the Oshkosh Defense manufacturer. 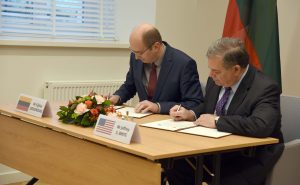 The Letter of Offer and Acceptance was signed at the Ministry of National Defence of Lithuania by Director of the Defence Materiel Agency under the MoD and Principal Deputy Assistant Secretary of the U.S. Army Jeffrey S. White.

“The combat support JLTV acquisition project which is implemented in cooperation with the United States Government, is one of the key elements in modernising and strengthening the Lithuanian Armed Forces and marks a qualitative leap in providing the Armed Forces with cutting-edge, combat-capable equipment. We are sending a strong signal to our allies with the procurement of these vehicles that Lithuania takes care and invests into its own and the Alliance’s security,” Minister of National Defence Raimundas Karoblis.

“This project crowns the long-standing partnership on strengthening the technical support in Lithuania’s combat readiness. We will continue the cooperation in order to ensure the success of these new opportunities in the decades to come,” Chargé d’Affaires a.i. at the U.S. Embassy in Vilnius Marcus Micheli says.

“It is an excellent tactical all-terrain vehicle that provides sufficient personnel protection and will ensure combat support with its relevant weaponry and equipment. Our soldiers will have to learn to operate it and master its characteristics. The amount and quality of the currently acquired weaponry and equipment shows beyond doubt that the power of the Lithuanian Armed Forces in increasing. I can feel the enthusiasm of our soldiers and I can see their responsibility and determination to defend the country — new technical potential will add to our efficiency,” Chief of Defence of Lithuania Lt Gen Valdemaras Rupšys.

The new JLTVs will be equipped with turrets and 12. 7 mm M2 QCB machine-guns and given to battalions of the Mechanised Infantry Brigade Iron Wolf and the Motorised Infantry Brigade Griffin while prioritising the national rapid response forces. The first all-terrain vehicles are planned to be delivered to Lithuania in late 2021.

The Ministry of National Defence will allocate about EUR 145 million for the acquisition of JLTVs, equipment and weaponry complements, personnel training, spare parts, and sustainment in 2020-2024.

The Defence Materiel Council of the Ministry of National Defence found the U.S.-manufactured JLTVs to meet the price-performance ratio best in late 2017, and the negotiations with the U.S. Government were opened on their procurement.

The JLTVs will augment and upgrade the car fleet of the corresponding type of the Lithuanian Armed Forces.

The JLTVs are a significant part of the Lithuanian Armed Forces modernisation programme, also encompassing procurement of the Vilkas/Boxer infantry fighting vehicles and the PZH 2000 self-propelled artillery systems. The Lithuanian Armed Forces identified a shortage of armoured all-terrain vehicles taking into account potential threats and the need of such vehicles for completing national defence tasks and deploying to multinational operations.

The shortage is a result of natural wear and tear of the present fleet and also because the need increases due to the expanding Armed Forces. Currently the Lithuanian Armed Forces uses HMMWV. 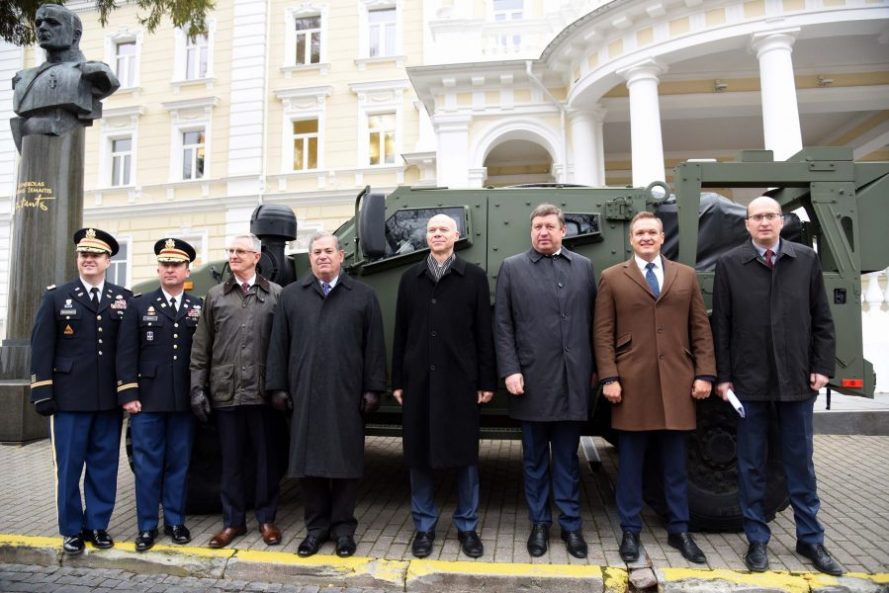 Barrett awarded contract for a US funded communication project in Egypt