“The SIG SAUER Next Generation Squad Weapons system is the only submission entirely designed, engineered and manufactured by a single American company. We are proud to deliver this comprehensive solution to the U.S. Army, with new capabilities to enhance mission effectiveness for our soldiers on the battlefield,” began Ron Cohen, President & CEO SIG SAUER, Inc. “Our ammunition, machine gun, rifle, and suppressors far surpass the performance of the legacy weapons system in range and lethality, offer exponentially better maneuverability, and are significantly lighter in weight.” 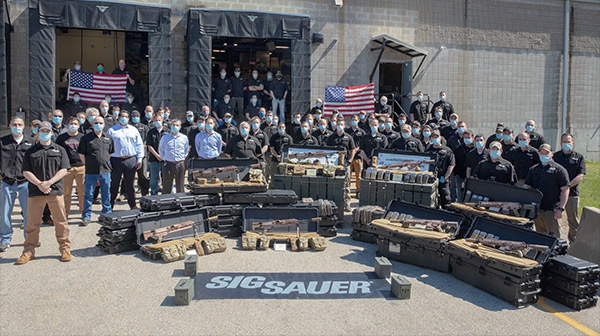 The features and benefits of the complete SIG SAUER Next-Generation Weapons Systems are:

SIG SAUER 6.8mm Hybrid Ammunition: designed to enhance mission effectiveness, this high-pressure, compact round combines a significant reduction in weight, with the ability to handle higher pressures resulting in increased velocity and greater penetration. Additionally, based on the cartridge design and the traditional manufacturing processes, the growth potential of the SIG 6.8mm ammunition is exponential.

SIG SAUER Rifle (NGSW-R): a lightweight rifle built on the foundation of the SIG SAUER weapons in service with the premier fighting forces across the globe combined with the added firepower of the 6.8mm round. Features include a fully collapsible and folding stock, rear and side charging handle, free-floating reinforced M-LOK™ handguard, fully ambidextrous controls, and quick-detach suppressor.

“I am very proud that every component of the SIG SAUER Next Generation Squad Weapons system was manufactured at our SIG SAUER facilities in New Hampshire and Arkansas and is entirely American made. Our engineers have worked in concert to optimize the system, ensuring that every component is synchronized, and our soldiers are equipped for the demands of the modern battlefield,” added Cohen. “Additionally, I would be remiss if I did not recognize the hard work and dedication of the entire team who worked tirelessly in these unprecedented times, in the face of a pandemic, to deliver the SIG SAUER NGSW system to the U.S. Army.”