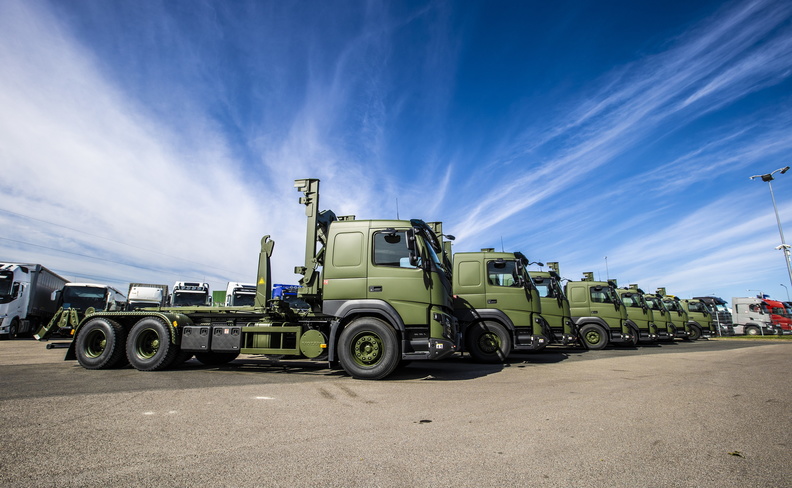 The vehicles are manufactured in Sweden, but all accessories and the superstructure have been designed and installed in Estonia by Volvo Trucks Estonia in cooperation with the Estonian company Pro Lift OÜ. As a tailor made solution, they have developed and manufactured a military device that can be used to operate both hook-lift swap bodies and shipping containers.

Minister of Defence Jüri Luik expressed his satisfaction with the increase in Estonia’s military capabilities. ‘With these container trucks, it is possible to transport essentially everything needed by the Estonian Defence Forces, and in an exceptionally large quantities – up to 65 tonnes’, said Luik.

He added that satisfaction is always greater when it comes to procuring high-quality military equipment or supplies. ‘Through international cooperation, Estonia is strengthening its defence relations with close partners while also contributing to the Estonian economy in the current crisis,’ said Luik.

‘Our goal is to provide the Estonian Defence Forces with durable and high-quality vehicles, which would not only help to increase defence capabilities, but also be as cost-effective as possible throughout the vehicle’s life cycle’, said Toomas Kalda, Head of the Vehicle Category at the Centre for Defence Investment’.

The framework agreement was signed in August of last year, and the total volume of the agreement is approximately EUR 6.9 million. The first two vehicles were delivered to the Estonian Defence Forces in February of this year, which allowed for the vehicles to be exhibited at the independence day parade, and the last delivery is planned for the last quarter of this year.

Maria Karlström, Managing Director of Volvo Trucks Estonia, noted that Volvo has been a long-term partner of the Estonian Defence Forces. ‘The country can be considered an informed customer in this field, a so-called smart customer, one who knows exactly what it needs and why. The Volvo FMX is a high-quality, reliable and durable truck,’ she added.