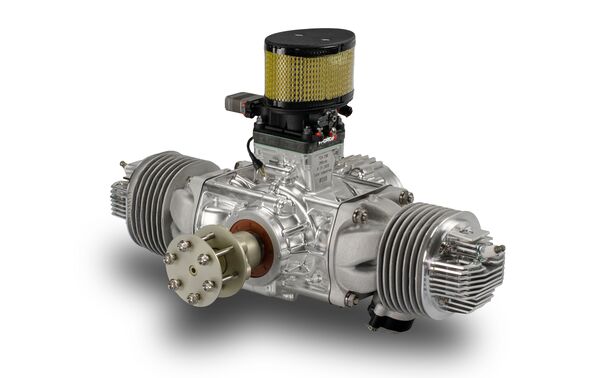 Bob Schmidt, UAV Propulsion Tech president and founder, told Janes ahead of the show on 12 August that the TOA288, which provides 24 hp and weighs 13 kg, is filling a market void for UAV engines with 15 hp or more. Most UAV propulsion systems, he said, are in the 5–10 hp range. Schmidt sees potential market growth for UAV engines with 15 hp or more because unmanned aircraft are getting larger, especially vertical take-off and landing (VTOL) models with multicopter designs.

The TOA288 is a twin cylinder, horizontal opposed, air-cooled, gasoline-powered engine. The propulsion system utilises fuel injection, an advanced electronic engine management system, and a 1 kW starter/generator. The TOA288 has 17.5 kW power at 6,500 rpm, according to UAV Propulsion Tech.

The Martin UAV V-Bat 128 is VTOL tail-sitting fixed-wing UAV that won an important US Navy (USN) competition and was on a team that won a Defence Research and Development Canada (DRDC) contract. The aircraft in April won the USN’s Mi2 Technology Demonstration. The V-Bat 128 was also part of a DRDC award in November 2020 to Kongsberg Geospatial in an effort that sought a high endurance and small footprint intelligence, surveillance, and reconnaissance UAV.

IDEF’21: HAVELSAN is going to exhibit its autonomous unmanned aerial and land vehicles developed with Robotic and Autonomous technologies