Belgian firearms manufacturer FN Herstal officially launches in Europe its new ultralight machine gun FN Evolys at DSEI 2021, an International Defense Exhibition that takes place in London, UK. With this new weapon, FN Herstal completes the family of its machine guns including the FN Minimi, the FN MAG and FN 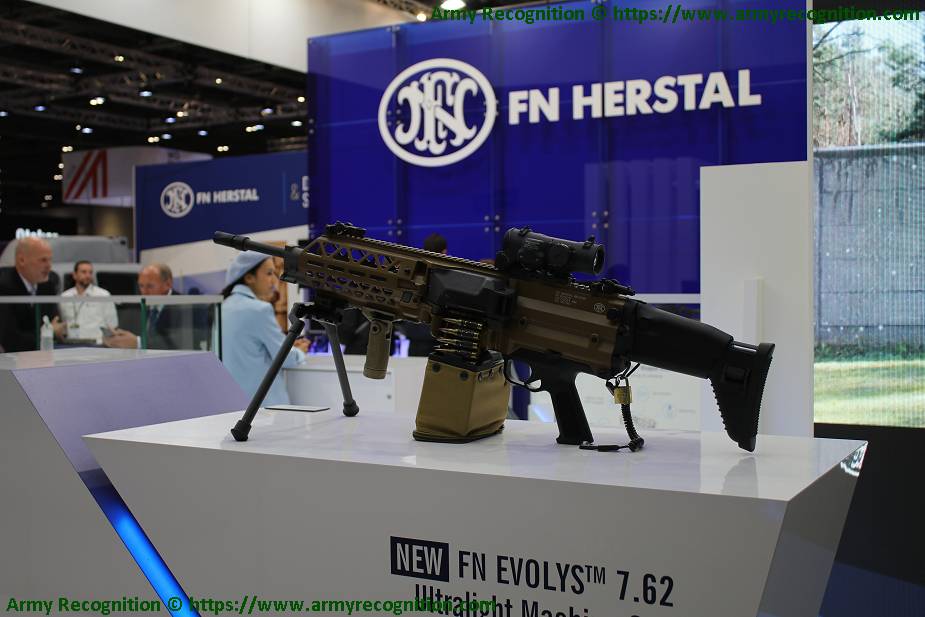 The FN EVOLYS™ is a new type of machine gun that completes the existing range of FN® machine guns, which are all combat proven and recognized as world references. The FN Evolys is an ultralight machine gun that is available in 5.56mm and 7.62mm calibers.

One of the main features of FN Evolys is the weight, using new design technology and latest generation of material components, FN Herstal engineers were able to obtain a weight of 5.5 kg for the FN Evolys 5.56mm caliber and 6.2 kg for the 7.62mm version. The new ultralight machine gun also combines belt-fed machine gun firepower with assault rifle ergonomics, which is an unprecedented benefit on the market today.

The FN EVOLYS is fitted with an ambidextrous fire selector that has a semi-auto position to engage point targets like with a rifle, while the full-auto position allows suppressive fire like with a machine gun. The FN EVOLYS ultralight machine gun has a rate of fire of approximately 750 rounds per minute. The new FN machine gun has an effective firing range of 800 m in 5.56mm caliber and 1,000 m in a 7.62mm configuration.

The FN EVOLYS is fitted with a buttstock adjustable in length and height, similar to the FN SCAR assault rifle’s one. The buttstock is fully independent of the weapon system. In the future, additional types of buttstocks could be introduced to meet customer requirements.

The top of the FN Evolys is equipped with a one-piece long top rail for in-line optical sight, such as day and night sights and magnifiers. The FN EVOLYS also features an M-LOCK receiver and a lower Picatinny rail. The weapon can be fitted with a bipod to increase comfort and stability when firing.

Since its digital launch last May, many European and international armed forces and special units have shown great interest in this innovative product designed and developed by Belgium-based company FN Herstal.