Saudi company ERAF and American company NAVISTAR have signed an agreement on Tuesday, March 8, 2022, during the World Defense Show 2022 that takes place in Riyadh to assemble the MAXXPRO MRAP (Mine Resistant Ambush Protected Vehicle) in a new facility in Saudi Arabia. 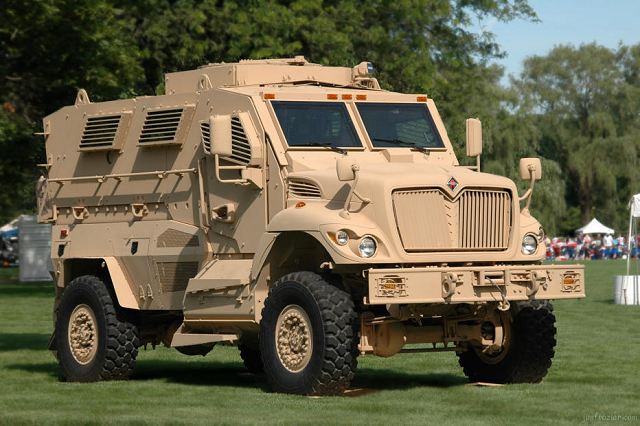 With this new agreement, NAVISTAR from the United States and ERAF from Saudi Arabia would like to provide the latest generation of MRAP vehicles to the armed forces of Saudi Arabia which have already demonstrated its protection and mobility capabilities during the conflicts in Iraq and Afghanistan.

Saudi company ERAF was established in 1996 as a manufacturing services provider attending to the needs of the military, commercial and industrial sectors. Currently, ERAF can develop and supply a broad portfolio of land, naval and power systems, defense products, security and commercial applications. ERAF systems and products are installed on new and old platforms, and the Saudi company also performs comprehensive platform modernization and upgrade programs.

Navistar Defense is an American company that produces wheeled combat armored vehicles and military trucks including the MAXXPRO family of MRAP (Mine Resistant Ambush Protected) vehicles. The MAXXPRO MRAP is one of the most protected vehicles in the world and the vehicle was designed to offer a high level of protection against mine and IED (Improvised Explosive Device).

The MaxxPro vehicle is based on the Navistar International model 7000 4×4 truck chassis and incorporates the design of a crew capsule with a V-shaped hull to increase vehicle and crew survivability by deflecting an upward directed blast from a landmine or Improvised Explosive Device away from the vehicle, while also presenting a sloped armor face. With such design, the MAXXPRO is able to withstand a 7 kg land mine blast under the wheeled and body of the vehicle without any injuries.

The MAXXPRO is designed with three main parts with the engine compartment at the front, the crew in the middle including the driver and commander, and the troop’s compartment at the rear. The front of the vehicle is fitted with a single door on each side of the hull while the rear part is equipped with a hydraulic ramp offering the soldier to quickly enter and leave the vehicle.

The International Maxxpro 4×4 MRAP is powered by the MaxxForce D family engine model D8.7L16, Turbo inter-cooled, direct electronic injection, and four-stroke. MaxxForce six-cylinder direct-injection turbocharged diesel D8.7L16 is coupled to a fully automatic power shift gearbox Allison 3000 with a total of five speeds forward and one in reverse. It can run at a maximum speed of 105 km/h with a maximum cruising range of 600 km.