Army Recognition published on April 20 the information according to which Sig Sauer is awarded the Next Generation Squad Weapons System (NGSW) Contract by the U.S. Army after a rigorous 27-month testing and evaluation process. The manufacturer is adding some information about this contract. 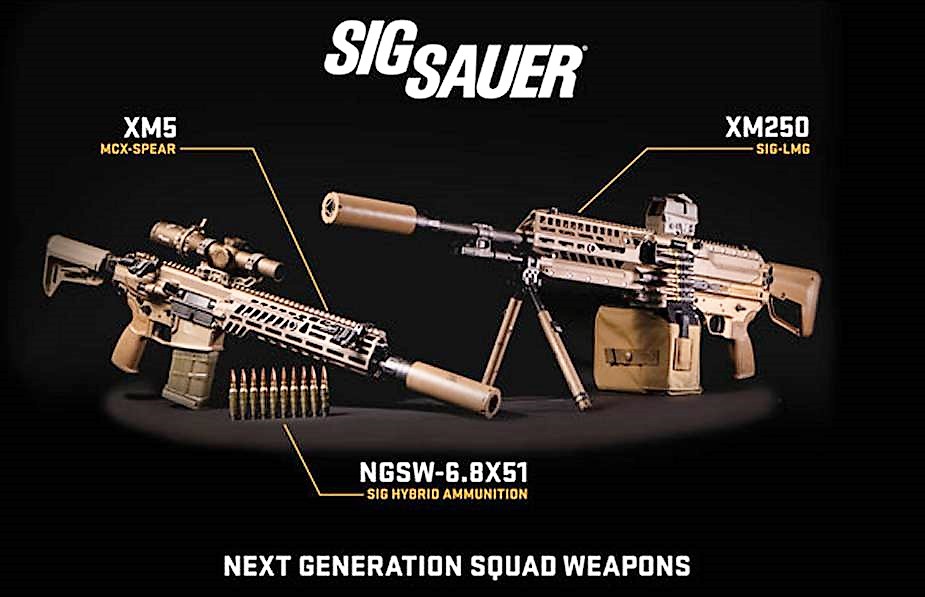 The SIG-LMG lightweight belt-fed machine gun and SIG MCX-Spear Rifle are purpose-built to harness the energy of the SIG Fury 6.8 Common Cartridge Ammunition enabling greater range and increased lethality while reducing the soldier’s load on the battlefield. Both the SIG-LMG and MCX-Spear deliver significant weapon and technology advancements to the soldier and provide a solution for battlefield overmatch in comparison to the current M249 and M4/M4A1.

The U.S. Army’s procurement of the NGSW System marks the beginning of an era where combat weapons are coupled with a suppressor as standard issue equipment. The SIG SLX Suppressors are designed to reduce harmful gas backflow, sound signature and flash. SIG SLX Suppressors feature a patented quick-detach design for easy installation and removal.

As reported by Todd Lopez, of the U.S Department of Defense, “We should note that this is the first time … in 65 years the Army will field a new weapon system of this nature: a rifle, an automatic rifle, a fire control system, and a new caliber family of ammunition,” Army Brig. Gen. Larry Q. Burris, the Soldier Lethality Cross-Functional Team director, said. The new system also arrived much quicker than anticipated: “This is revolutionary, and we arrived at this point in record time because we leveraged middle-tier of acquisition rapid fielding authorities to enable speed and flexibility in defining requirements,” he said. Burris said the Army was able to do in 27 months what might otherwise have taken anywhere from eight to ten years.

Brig. Gen. William M. Boruff, the program executive officer, Joint Program Executive Office, Armaments and Ammunition, said the new 6.8mm ammunition will initially be produced by Sig Sauer, but that the Army will eventually take over production of ammunition at Lake City Army Ammunition Plant in Missouri. After that, Sig Saur will become a second-source provider of the new ammunition.

“We already have started preparing the site for the new building,” Boruff said. “The new building will be stood up in Lake City Army Ammunition Plant and it will start producing around 25/26. We’ll work with Sig Saur. We’re clearing some space now at the Lake City facility to start production.”

When the time comes, Boruff said, the Army will have enough of the new ammunition to begin fielding the new rifles.

“The capability increase that these weapons provide over the M4 and the M249 is what’s really exciting,” Col. Scott Madore, the project manager for Soldier Lethality, said. “It’s a significant change: the way it fires, the way, when you apply the fire control — which was previously awarded back in January — when you apply that to these weapons systems, it improves or increases the probability of a for the individual soldier. It reduces aim error, and it’s a game-changer. That’s really what excites me about these two systems as we saw them go through testing.”

US Army awards contract to Lockheed Martin to produce eighth