Nexter Arrowtech has developed the 120mm SHARD armour-piercing discarding-sabot fin-stabilized (APFSDS) in order to give main battle tanks the means to face the latest generation of armored threats. This ammunition, presented on the Nexter stand at Eurosatory 2022, can be fired by all armored vehicles equipped with NATO-standard 120mm smoothbore guns, of all calibers and generations.

SHARD, an acronym for “Solution for Hardenered ARmour Defeat”, is the most powerful tungsten alloy APFSDS currently available. Its penetration capabilities are almost 20% higher than those of commercially available ammunition. It combines an unmatched level of penetration against metal armor and complex targets with a very good level of dispersion. Its innovative architecture, combining an extended penetrator, an optimized sabot and a low-erosive propellant powder, enables it to generate superior energy while significantly reducing the pressure level, thus lessening significantly the tube wear. 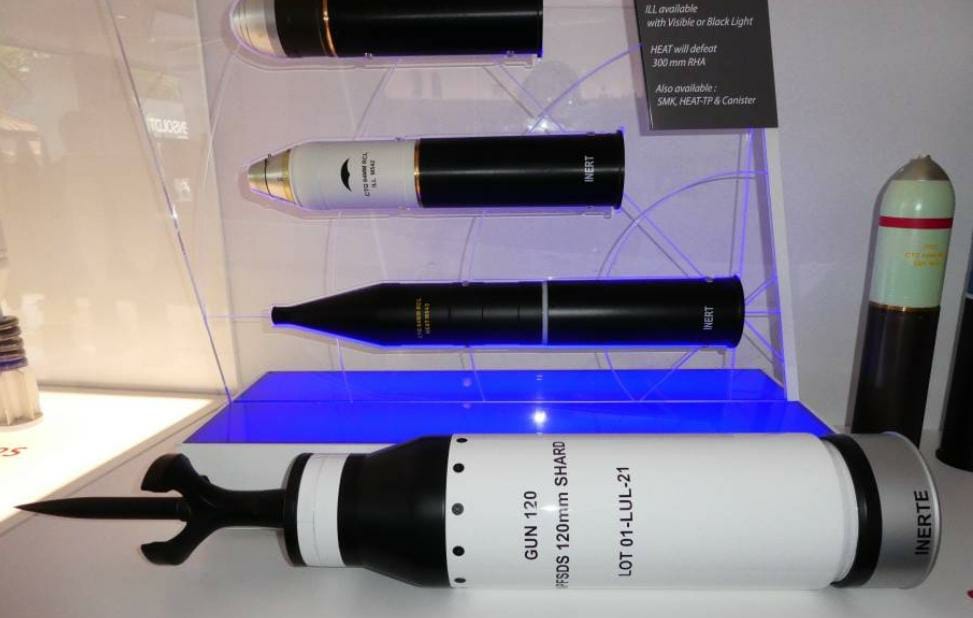 SHARD, developed in an agile mode, has been designed to allow incremental upgrades in order to adapt to future threats, including the incorporation of new penetrator technology and higher energy powders. Thus, in a short time, the terminal ballistic performance of the ammunition can be increased by more than 20%.

The development of SHARD was finalized at the end of 2021 and its qualification will be completed by the end of 2022. Several firing campaigns have been successfully conducted since the beginning of the year, on 52-caliber weapons (on Leclerc tanks) and 44-caliber weapons (on Leopard 2 and M1 Abrams). These dynamic tests have confirmed the performance levels achieved during the development tests.

“At the time of the last Eurosatory show held in 2018, SHARD was an embryonic project: we were then aiming for both a rapid market launch and very high performance by relying on our technical mastery of high elongation penetrators. Four years later after numerous shootings, SHARD has become a reality. We are very proud to be able to offer this product to our customers around the world,” explains Dominique Guillet, Director of Nexter Arrowtech.

SHARD is both the latest addition to Nexter Arrowtech’s range of arrow ammunition, which extends from medium (25x137mm, 30x165mm, 30x173mm) to large caliber (90mm, 105mm, 120mm), and a milestone in the development of very high-performance ammunition for future land combat systems, including the MGCS. With the expertise acquired in this field, Nexter is preparing the introduction of the ASCALON weapon system and associated compact ammunition to revolutionize land armament.

During Eurosatory 2022, PT Pindad and Nexter agreed to cooperate on the supply of the latest generation 120mm tank ammunition for the Indonesian Army. The agreement sealed between the two companies will permit to offer of a complete range of 120mm tank ammunition, including SHARD APFSDS, High Explosive and training rounds. The agreement foresees also strong local manufacturing, strengthening the Indonesian industry capabilities. The signature was witnessed by the Indonesian Ministry of Defence and French DGA.

Following the signature of this Letter of Intent, the Executive Vice President Weapon and Ammunition Dominique Guillet declared: “As a European leader in medium and large ammunition, Nexter is committed to establishing long-term partnerships with the Indonesian industry to enhance Indonesia’s local high-tech industrial content. Our cooperation with Indonesia’s largest land defense systems company PT Pindad for the complete range of 120mm ammunition is a perfect illustration of this ambition and we are proud of this new success.”

This new step is following the signature of a memorandum of understanding in Indonesia last February in presence of the French and Indonesian Ministries of Defense pertaining to their cooperation on various types of medium and large-caliber ammunition.

US Army conducts first firing of Patriot missiles from Palau