The original version of the M-84 MBT (Main Battle Tank) is armed with a 125 mm smoothbore cannon derived from the Soviet 2A46. The turret is fitted with an automatic loading system, which enables it to sustain a firing rate of 8 rounds per minute with a crew of three. The second armament includes one 7.62mm coaxial machine gun, and one 12.7mm anti-aircraft gun mounted on the commander’s turret. 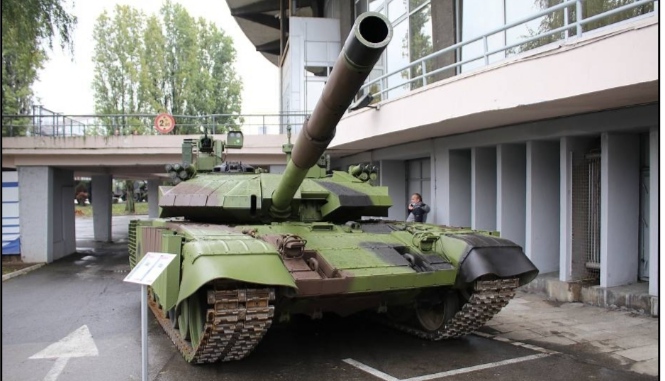 The hull of the M-84 MBT is divided into three compartments with the driver at the front, turret in the center, and the power pack at the rear. The turret is mounted in the center of the hull with the gunner on the left and the commander on the right.

The M84AS2 armament includes one 125mm smoothbore L48 gun with the same autoloading system as the previous version of the M-84. The tank keeps the 7.62mm coaxial machine gun, but the 12.7mm anti-aircraft machine gun is replaced by a stabilized RCWS (Remotely Controlled Weapon Station) armed with one 12.7mm heavy machine gun. With the RCWS, the tank commander can conduct all the firing operations from inside of the tank during day/night and on the move.

Commander’s situational awareness is improved with the integration of all-around video surveillance and battle management system with digital communication equipment and navigation and orientation system.

The M-84AS2 is fitted with additional armor mounted around the hull and the turret using a new generation of Explosive Reactive Armor (ERA) which provides a high level of protection against APFSDS (Armor-Piercing Fin-Stabilized Discarding Sabot) and tandem HEAT (High-Explosive Anti-Tank) rounds. The tank is also fitted with a laser radiation detection system connected with automatic smoke grenade dischargers.

The survivability of the M-84AS2 is improved with an automatic fire and fuel explosion extinguishing subsystem and multispectral camouflage net which significantly reduces vehicle signature in NIR (Near InfraRed), thermal and radar part of EM (ElectroMagnetic) spectrum.

The mobility of the M-84AS2 is also increased by the use of an engine with a new compact injection fuel pump, new torsion bars and shock absorbers, and new double pin forged tracks with considerably longer service life.

US Army accelerates delivery of Sentinel A4 Missile Defense Radar