One of the regular IDEX participants Otokar, participated in IDEX – 2021, in Abu Dhabi, the capital of United Arab Emirates in order to meet with its more than 55 End Users from all over the world. Introducing its electric armored vehicle, AKREP IIe for first time for its international markets, Otokar also displayed its well-known and globally desired wheeled armored vehicles ARMA 6×6 and COBRA II 4×4 as well as the new generation COBRA II MRAP. In addition to the wheeled vehicles, the tracked Infantry Fighting Vehicle, SAFA has also taken its place in Otokar stand. 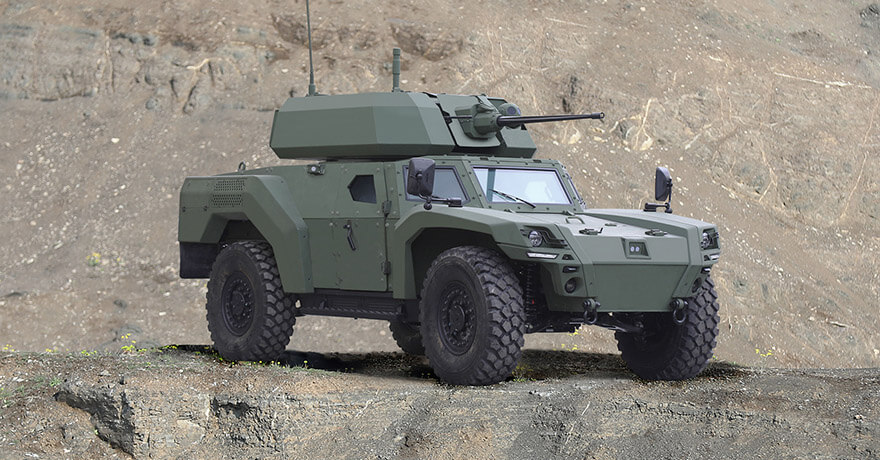 Serdar Görgüç, General Manager, Otokar, stated that being a regular vendor to both NATO and the United Nations, Otokar is continuously expanding its customer portfolio and serving wider range of customers over the world every year, due to its well appreciated user-oriented approach. “Currently, around 33 thousand Otokar vehicles are actively in service in more than 36 countries in the toughest climates and risky regions. We believe that the performance of our vehicles serving worldwide are the most important reference for our potential customers. We are at the forefront of the global defense industry with our know-how in land systems, engineering and R&D capabilities as well as our wide product range. As our main goal is to continuously strengthen our presence in the region, IDEX offers a great opportunity to meet our existing users as well as potential customers. We will leverage our know-how and experience to respond to the specific requirements of the region in the best possible way.”

Emphasizing Otokar’s strong presence in Gulf region, Görgüç said “GCC countries are particularly important for Otokar. Many different vehicle types of wide Otokar military range are already serving successfully to the requirements of the region in different forces since early 2000s. Through our local company Otokar Land Systems, which was established in 2016, we became much closer to our valued customers. Through our recent activities, in addition to our supplier and contractor role, Otokar highly enjoys being locally present in GCC.”

“In parallel to the successful activities of our joint venture company with EDGE of Abu Dhabi Government, Al Jasoor, RABDAN 8×8 Infantry Fighting Vehicles are already in service of the UAE Armed Forces and despite the pandemic, production and deliveries continue as initially planned.”

Being smaller in size and lesser in weight highly contribute to the agility of low silhouette AKREP II. Steering capability on all–axles significantly increases the maneuverability of four-wheel drive AKREP II.  Thanks to the independent suspension system and swift torque control, AKREP II can operate with equal ease on all challenging terrain conditions, no matter soft sand, deep mud, and snow. AKREP II can carry total of 3 crew, driver, commander and gunner at a maximum speed of 110 km per hour.

Apart from being a perfect weapon carrier for all small, medium, and high calibers, AKREP II is an ideal solution for reconnaissance, scouting, surveillance, and base / air defense missions with quick reaction and silent mobility capabilities.

Like all other OTOKAR vehicles, the electronic system of AKREP II is also designed with an open system architecture where the electronic and human interface can be configured according to customer requirements.

The electric-based power and propulsion results in quicker start with instantaneous high torque for increased mobility. Due to the “Drive-by-Wire” system of electrically controlled steering, acceleration, and braking functions, AKREP IIe appears in the market as technically feasible platform for being remotely controlled or driving assistance system applications including autonomous capabilities.

The vehicle provides superior protection for the crew against ballistic, mine and IED threats while maintaining high cross-country mobility in battlefield conditions with its independent suspension system.  It is specifically designed to provide high reliability, ease of maintenance and quick removal / installation of power pack.

With its modular design, COBRA II MRAP provides high payload and spacious internal space for integration of weapon systems and mission equipment. The vehicle can be configured with alternative seating layouts for up to 11 personnel with 3 or 5 door configurations as per specific user requirements.

COBRA II offers high level of protection, payload capacity, and large internal volume. In addition to superior mobility, COBRA II also comes with the capacity to accommodate 9 personnel including the driver and commander, offering high protection against ballistic, mine and IED threats. Delivering high performance in the toughest terrain and climate conditions with high power to weight ratio, COBRA II is tested rigorously in different parts of the world, on toughest terrain and climate conditions, and made thousands of miles. Preferred especially for offering a wide range of weapons integration and mission equipment options, COBRA II is successfully used for border protection as well as internal security and peacekeeping missions. The modular structure of COBRA II also makes the vehicle a flexible platform to be used as a personnel carrier, weapons platform, ground surveillance radar, CBRN reconnaissance vehicle, command control vehicle, and ambulance.

ARMA 6×6 stands out especially with its high payload capacity and large interior volume. ARMA can be equipped with different weapons and turrets according to the needs. The ARMA 6×6 can be used for various missions as an armored personnel carrier, armored combat vehicle, command control, reconnaissance, and CBRN reconnaissance vehicle while different weapon systems can be integrated into the vehicle.

Otokar’s SAFA IFV was exhibited with Otokar design MIZRAK-30 medium turret. The vehicle stands out with mobility, firepower and survivability features. Due to its modular design, SAFA can be fitted with manned or unmanned weapon systems ranging from 7,62 mm to 120 mm as well as air defense and mortar systems. With superior mobility, SAFA can serve in all kinds of combat environments from urban, built-up areas and light bridges to woodlands and all terrains, especially on soft surfaces where main battle tanks are unable to operate due to their heavy weights. Reliable and robust torsion bar suspension system consists of seven dual rubber-tire road wheels on each side. SAFA has an Automatic Track Tensioning system which can adjust track tension for different road conditions to achieve outstanding mobility.

SAFA has a power pack in the front of the hull combined with turbo charged diesel engine and an automatic transmission provides which power ranging from 700 hp to 1100 hp.

The multi-role, modular SAFA series is designed as a platform to meet the users’ needs for a single platform to use in different missions. Tested in the toughest climates and on rough terrain, SAFA boasts best-in-class ballistic and mine protection with modular armor structure that can be configured and tailored as per specific user requirements. SAFA, which can be integrated with active protection systems, has the capacity of carrying up to 9 infantry in addition to its crew of three (commander, gunner and driver).