At the recent DSEI 2021 defense exhibition in London, Hanwha Defense still showcased its « old » UGV dating back to 2019, telling Army Recognition the new one – called I-MPUGV – could not be brought for the occasion, while about to start testing operations with the Korean army. The process is on track. 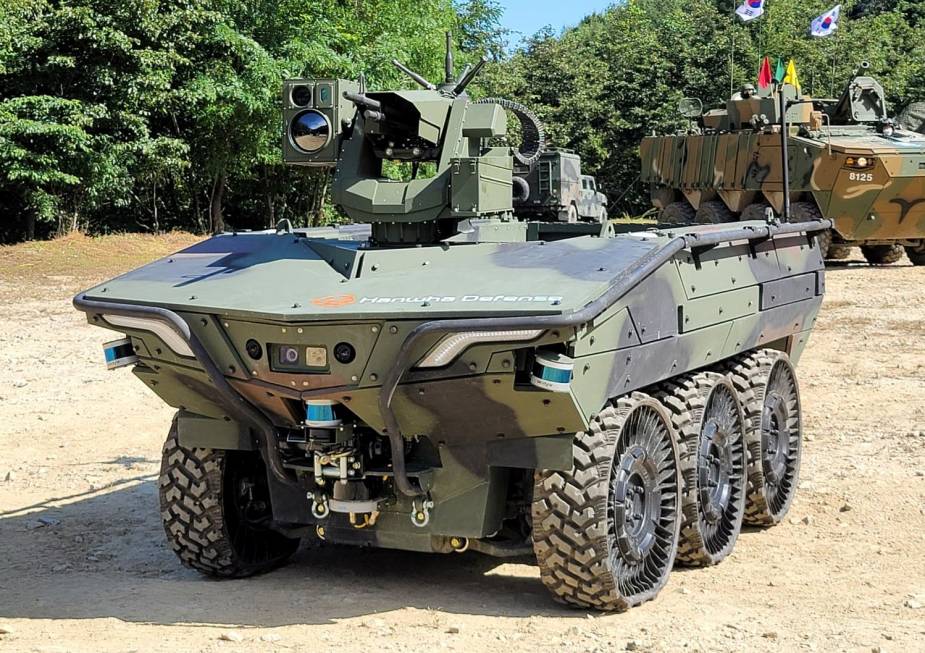 The South Korean company announced on 8 October that its recently unveiled Intelligent, Multi-Purpose Unmanned Ground Vehicle (I-MPUGV) prototype has begun pilot operations with the 5th Infantry Division of the Republic of Korea Army (RoKA). As reported by Janes, the six-wheel, artificial-intelligence (AI)-enabled vehicle, which appears to be a more advanced and larger variant of the company’s 1.5-tonne MPUGV prototype, has been undergoing trials with the RoKA since 5 October, noted the company, adding that the army will be testing the UGV’s locally developed remote-controlled weapon system (RCWS) as well as the vehicle’s capability to carry out remote-controlled operations and GPS-enabled autonomous driving.

The vehicle – Dronebot Warrior – had previously been trialed by the South Korean Army’s specialized unmanned systems unit and demonstrated its various capabilities, including teleoperation, obstacle avoidance, autonomous navigation, unmanned aerial vehicle (UAV) communication, gunfire detection, and gunnery. The prototype MPUGV is a two-tonne-class vehicle designed to support infantry units. The updated design is based on a 6-wheeled platform that offers increased speed and range on a single battery charge over its previous UGVs. According to DAPA’s specifications, the vehicle will be capable of traveling at road and cross-country speeds of up to 40 km/h and 20 km/h respectively. It will also be expected to offer a 500kg-payload capacity, more than twice the capacity of the existing vehicle, which can carry up to 200 kg.

AUSA 2021: Army prepares for next phase of RCV prototype testing