According to information published by the Russian press agency TASS, Russia is in the process to develop an air-droppable version of the latest 122mm Tornado-G MLRS Multiple Launch Rocket System for the Russian Airborne Troops. 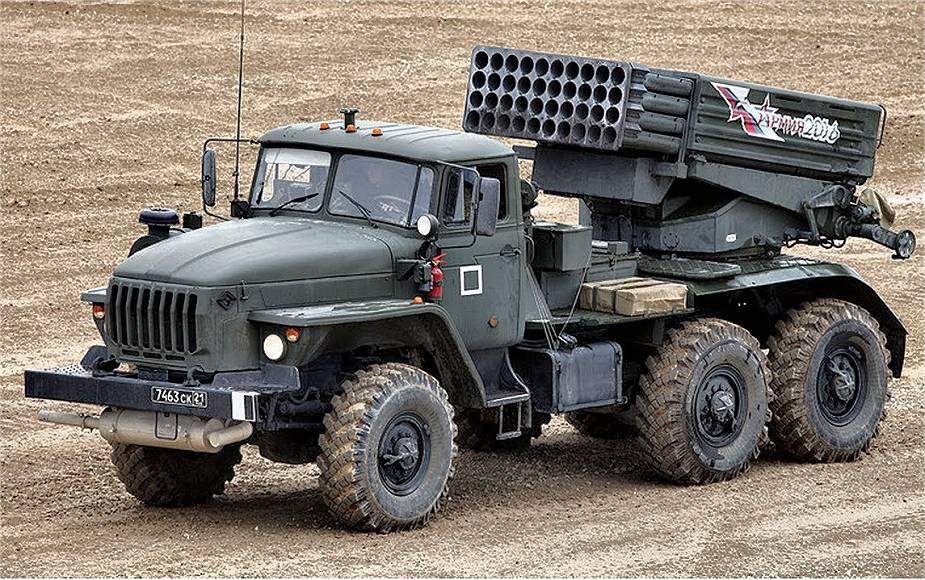 The Russian state armaments program plans to use the original launch rocket system of the Tornado-G mounted on a new chassis. The Tornado-G MLRS (Multiple Launch Rocket System ) is an improved version of the standard Russian-made 122mm BM-21 rocket launcher system based on a Kamaz or Ural-4320 truck.

A Multiple Launch Rocket System (MLRS) is a type of rocket artillery system that contains multiple launchers which are assembled onto the same platform. The MLRS provides military forces an all-weather, indirect, area fire weapon system to strike counter-fire, air defense, armored formations, and other high-payoff targets at all depths of the tactical battlefield.

The Tornado-G is equipped with a bank of 40 launch tubes 122 mm arranged in a rectangular shape that can be turned away from the unprotected cab. The rocket tube arrangement is a single rectangular bank of four layers each with 10 tubes. The roof of the Tornado-G crew cab is fitted with a small antenna for the GLONASS satellite navigation system. It can fire upgraded 122 mm Grad HE-Frag and HE (High Explosive)/HEAT (High-Explosive Anti-Tank) rocket variants, 9M538, 9M539, and 9M541.

The Tornado-G can fire upgraded 122 mm Grad HE-Frag and HE/HEAT rocket variants, 9M538, 9M539, and 9M541. The new rocket has a much longer warhead section but without any increase in the overall length. The rockets have a maximum range of 30 km. According to Russian military sources, the new rockets of the Tornado-G could have a maximum firing range of 90 km.