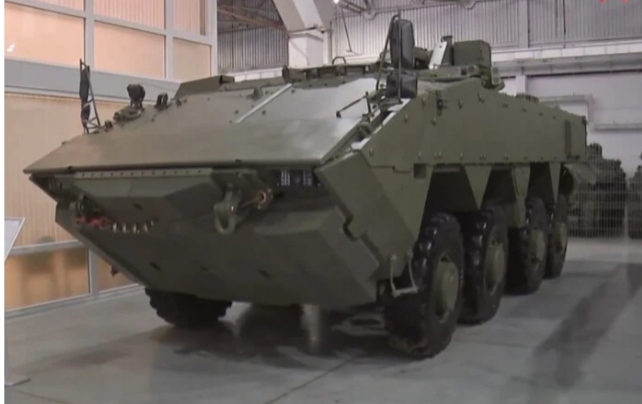 Alexey Krivoruchko on Thursday reviewed the production of armored vehicles at the Arzamas machine-building plant of the Military Industrial Company, where, in particular, he got acquainted with the progress of work on the latest armored vehicles on the Boomerang platform.

A new version of the K-17 Bumerang armored personnel carrier with additional armour elements was displayed publicly for the first time.

K-17 Bumerang is reported to be a replacement for the iconic Soviet BTR-80. The new vehicle is equipped with 12.7 mm machine gun.

According to the head of the 154th military representative office, Lieutenant Colonel Yuri Chikin, state trials of the Boomerang armored vehicles are planned to begin in the spring of 2022.

This new armored personnel carrier has a crew of 3, including commander, gunner and driver. It can carry 9 soldiers.

Vehicle has a welded hull and turret. Its armor is modular, so protection level can be tailored to suit mission requirements. So far its protection level is classified. However, it seems that all-round protection with maximum armor is against 12.7-mm armor-piercing round.

Vehicle has a V-shaped hull that deflects mine blasts away. As usually this vehicle is fitted with NBC protection and automatic fire suppression systems. It has been reported that the Bumerang can be fitted with active protection system.

Otokar promotes its capabilities in land systems in Latin America