According to information published by the “Daily Sabah” website on January 20, 2022, the Turkish-made HISAR-O+ air defense missile system was delivered to the Turkish army.

The HISAR-O+ is a new generation of air defense missile systems fully developed and designed in Turkey by the companies Aselsan and Roketsan. 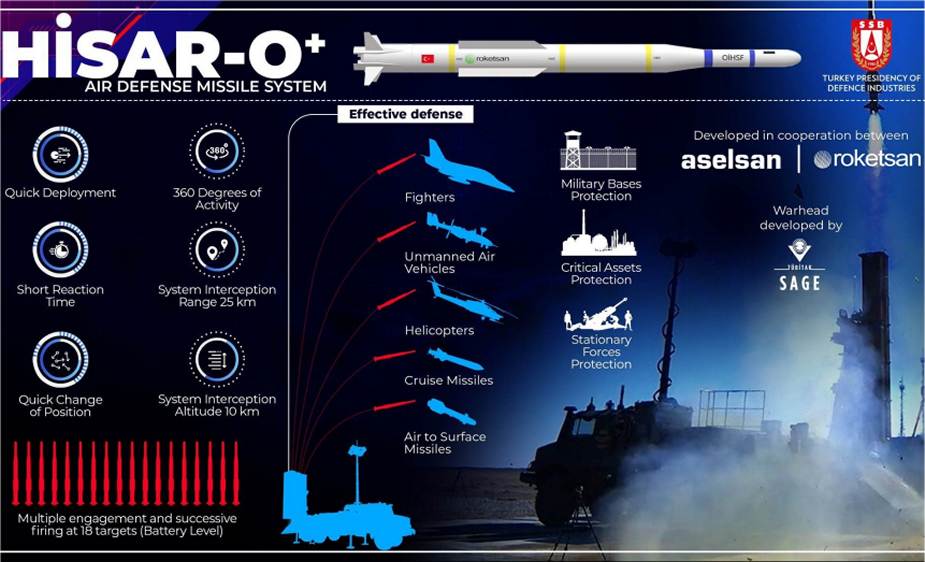 On January 4, 2022, Army Recognition has reported that Turkey has conducted final firing tests with its home-made HISAR-O+ air defense missile system. It was the latest acceptance test before its operational deployment with the Turkish armed forces.

A battery of HISAR-O+ consists of three launcher units (MLS), one Fire Control Centre (FCC), one Tactical Data Link Centre System (TDLCS), and one Electro-Optical System. The missile launcher unit is mounted at the rear of a Mercedes-Benz Zetros 6×6 military truck chassis.

The HISAR-O+ is bale to detect aerial targets on 360° and is capable of engaging and firing against at least nine different targets simultaneously. The air defense system is designed to destroy aerial targets as fighters, helicopters, drones, cruise missiles, and air-to-surface missiles with a maximum firing range of 25 km. The HISAR-O+ is able to detect aerial threats at a maximum range of 120 km and an altitude of 50 km.