According to information published by the French defense website “Opex 360”, the French Ministry of Defense announces the first delivery of 20 Jaguar EBRC 6×6 armored vehicles, to the “1er Régiment de Chasseurs d’Afrique”, a cavalry regiment of the French army. The Jaguar EBRC is the latest generation of 6×6 Reconnaissance and Combat Armored Vehicle developed under the Scorpion program of the French Army. 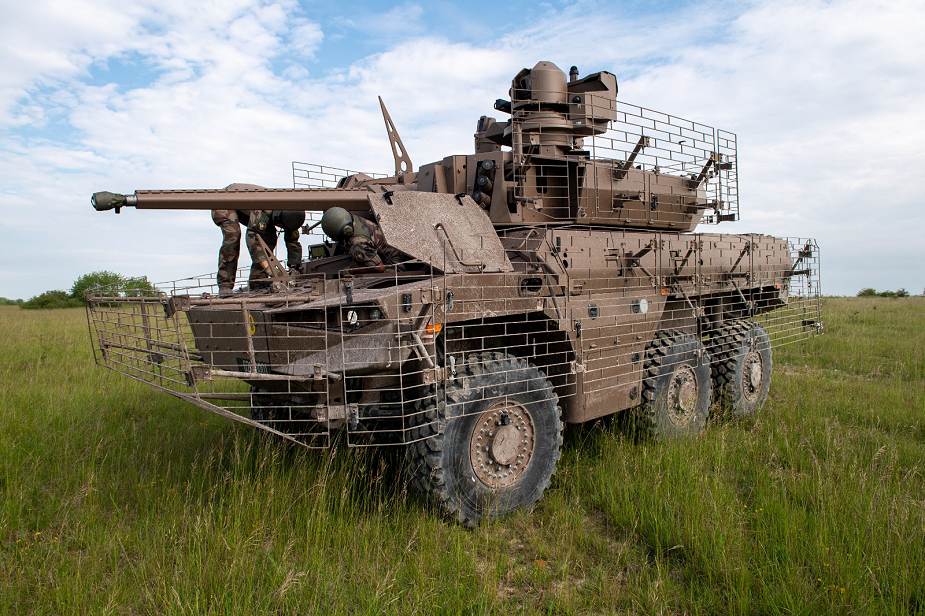 Citing the website “Opex 360”, the “1er Régiment de Chasseurs d’Afrique”, a cavalry regiment of the French army will receive this month a first of 20 Jaguar EBRC. This unit will be also in charge to train the future users of the Jaguar in the French army.

The Jaguar EBRC (Engin Blindé de Reconnaissance et de Combat – Reconnaissance and Combat Armored Vehicle) was jointly developed by the French companies Nexter Systems, Renault Trucks Defense and Thales. The vehicle will replace the AMX-10RC, the ERC-90 Sagaie, and the VAB Hot in service with the French Army.

The Jaguar EBRC is fitted with a two-man turret 40 CTAS armed with one 40mm CTC cannon with Ammunition Handling System (AHS). The 40mm cannon will have a maximum range of 1,500 m. the weapon system also includes one remote weapon station armed with a 7.62mm machine gun mounted on the top of the turret. The right side of the turret is fitted with two launchers for the MMP (Missile Moyenne Portée – Medium Range Missile) missile. The MMP missile is a fire-and-forget missile with lock-on before launch and automatic self-guidance which has a maximum range of 4,000 m.

In September 2020, France’s Ministry of the Armed Forces has ordered 42 Jaguar 6×6 armored vehicles. In total the French Army is set to receive 300 Jaguar vehicles by 2030 as part of a major recapitalization of the country’s ground forces. By 2025 150 Jaguars are set to be delivered.