On January 27, 2022, the Indonesian army (TNI), received seven 6×6 Rhino Ranpur Fire Support Vehicles delivered by PT Pindad, on top of 26 units of Anoa 6×6 (APC & Komando), and 10 units of Komodo 4×4 tactical vehicles (APC). Two of the Ranpur Badak FSVs assigned to the Kikav 8/KSC/2 Kostrad unit.have immediately been submitted to a complete inspection in view of ensuring they can properly carry on their tasks. 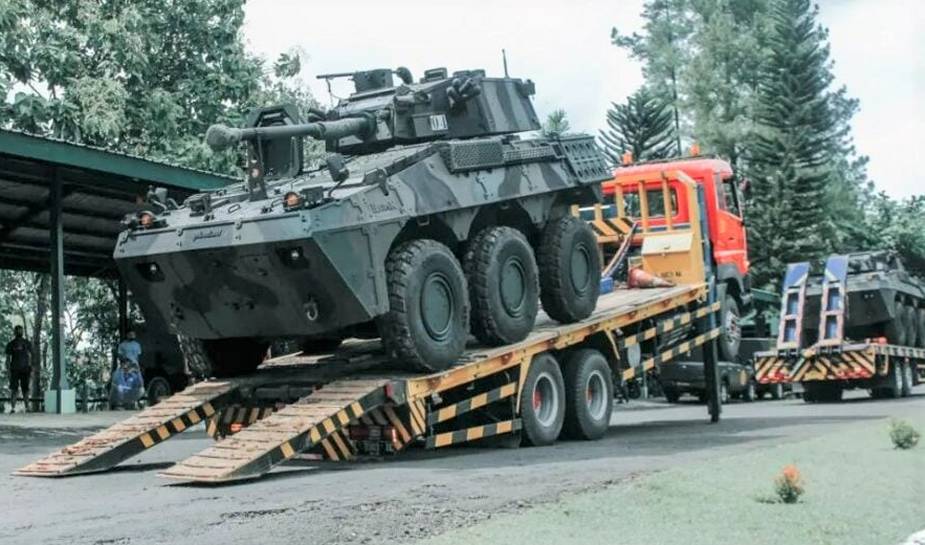 Badak/Ranpur is a fire support vehicle (FSV) produced by PT Pindad in collaboration with the Belgian company CMI Defence. The Ranpur was intended to meet the requirements of the Indonesian Army. It was first showcased at the IndoDefence 2014 exhibition held in Jakarta. PT Pindad signed a memorandum of understanding or MoU with CMI in September 2014. The MoU ailed at developing the Cockerill turret system with a variety of weapons ranging from 25mm to 105mm calibers for this new combat vehicle.

.Badak is a new variant of the Ranpur 6×6 PT Pindad family which was made based on the needs of the TNI, especially cavalry units. This vehicle has a weight of 16.5 tons, is armed with a Cockerill CSE 90 LP (90 mm) gun and a 7.62 mm machine gun, and is operated by 3 personnel. The 340 HP turbodiesel diesel engine equipped is capable of bringing this armored vehicle at a top speed of 80 km/h with a cruising range of 600 km. The armored hull of the Rhino offers level 3 protection.

The Badak FSV incorporates a welded monocoque steel hull based on the modified chassis of the Anoa 6×6 armored personnel carrier (APC).

Iraq to get new air-defence systems