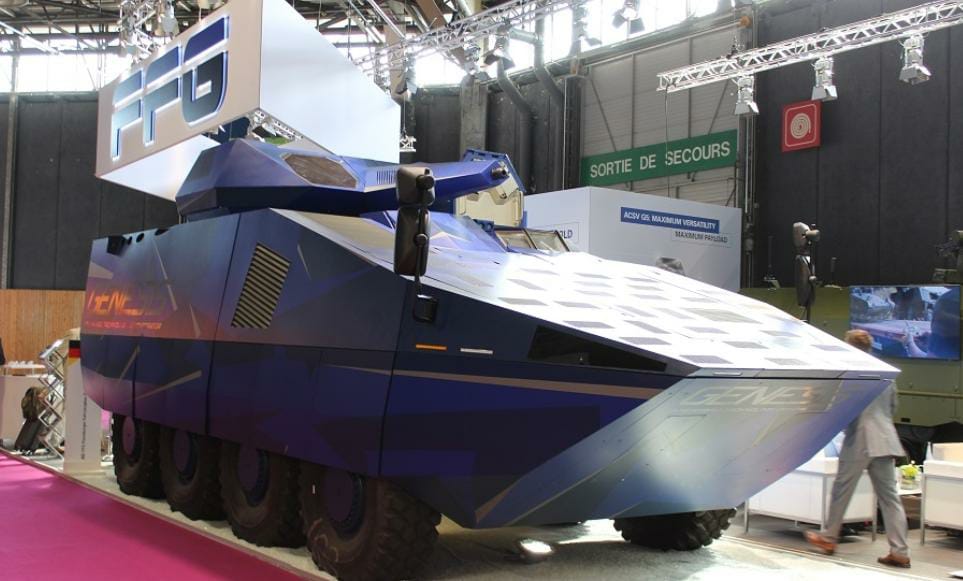 The hybrid-powered technology carrier GENESIS, which, as a kind of self-financed blueprint for the future of tanks, is sure to attract the attention of the trade public. For the advantages of the hybrid concept with diesel-electric power unit used here are obvious, e.g. reduced fuel consumption, minimised exhaust emissions, quiet movement in the field. All drive, control and vital subsystems of the GENESIS are housed in the vehicle platform, which is intended as a carrier for various mission modules.

The Genesis was developed to provide a modular concept similar to the German-made Boxer 8×8 armored vehicle using a platform/drive-line and a removable mission module. The vehicle is powered by a hybrid diesel/electric powerpack located at the front of the vehicle. Hybrid/diesel-electric propulsion is the technology where a diesel internal combustion engine drives a generator to produce energy for an electric motor in a vehicle.

The significant onboard energy storage system can be used to meet silent watch requirements for extended periods of time for various missions. Depending on the power requirements of the silent watch, a mission can be extended over a few hours. Silent mobility over a limited distance is also achievable where the vehicle can move in or out of hostile territory with a reduced chance of being detected.

US Army conducts first firing of Patriot missiles from Palau