SVI Engineering, a specialized manufacturer of armoured products, has used the Africa Aerospace and Defence Show (AAD2022) to reveal the latest addition to its growing range of versatile bullet-resistant vehicles: the Max 3 Six-Wheeler.

Like the standard version of the Max 3, this new variant is built on Toyota’s trusty Land Cruiser 79 chassis and likewise retains the Japanese firm’s proven 4.5-litre V8 turbodiesel powertrain. What sets the MAX 3 Six-Wheeler apart, of course, is the upgrade from the standard two axles to three.

The six-wheel concept unveiled at AAD2022 is based on the Max 3 Double Cab body style, though this new axle configuration will also be available on the company’s Max 3 Single Cab and Max 3 Troopy armoured personnel carrier.

The addition of a third axle means the Max 3’s Gross Vehicle Mass (GVM) can be safely increased to 5,500 kg. This opens the door to numerous military and security applications, including the fitment of various weapon systems, cargo-carrying options and even field ambulance concepts. 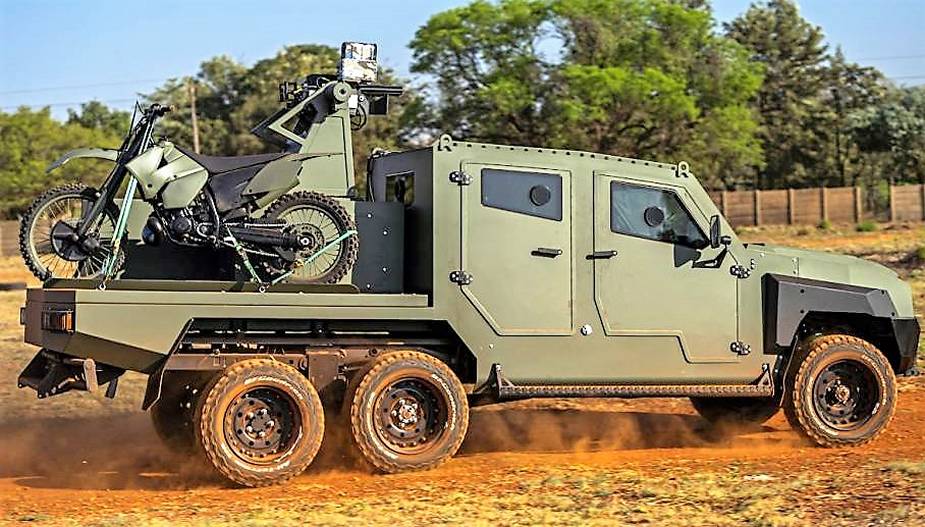 In order to keep the cost and complexity of the system in check, the additional axle is non-driven. Even so, the already impressive go-anywhere ability of the standard vehicle is enhanced as the extra axle provides increased flotation over soft surfaces. The proven, highly capable powertrain remains untouched, simplifying servicing requirements and the process of sourcing of spare mechanical parts.

However, the six-wheel modification does include a track-width correction to align the track of the rear wheels with that of the front (a Toyota Land Cruiser 79 anomaly) as well as an upgrade to disc brakes on the two rearmost axles (in addition to the standard items at the front) to improve the stopping performance at full GVM.

The six-wheeler version of the Max 3 Double Cab displayed at AAD2022 is also fitted with an intelligent anti-drone solution. The anti-drone system offered by SVI employs radar to locate, identify and track incoming hostile drones. The information is relayed to the battle management system (BMS) connected to the automated grenade launcher (AGL). The BMS determines the trajectory of and distance to the drone, intercepting and disabling the pilotless device via close-proximity grenade explosions.

The final step is to retrieve evidence from the drone. For this task, an off-road motorcycle is provided, allowing personnel to reach the wreck quickly over rough terrain.

The conversion process to create a Max 3 entails removing the soft-skin body of the donor Land Cruiser 79 and replacing it with a hull designed in-house and manufactured from armoured steel plate. The construction of the multi-role vehicle provides a minimum protection level of EN1063 BR6 (assault rifles) with additional protection against anti-personnel grenades. The vehicle is furthermore upgradeable to BR7.

Although the drivetrain is standard, the Max 3 gains wheels and tyres with an improved load rating as well as upgraded suspension and an additional rear anti-roll bar. As mentioned above, the Max 3 Six-Wheeler furthermore features a track-width correction and disc brakes all around.

Benny Jiyane, Chairman of SVI Engineering, says the sheer size of the company’s stand at this year’s show is indicative of just how much SVI has grown – locally and internationally – over the past few years. “SVI has long been the leading the way in South Africa when it comes to providing class-leading armouring solutions to the civilian, security and military industries. But we’ve ramped up our operations significantly over the past few years and our massive stand at AAD2022 – the largest defence and aviation exhibition in Africa – is a showcase of both how far we’ve come and where we’re going,” says Jiyane.

SVI was formed in 2004 as an innovative mechanical engineering firm specialising in armoured vehicles and products. The company is a market leader in Africa serving the individual, corporate, security, mining and governmental markets. SVI has a Level 2 B-BBEE certification and its quality management system is certified to ISO 9001:2015 by TÜV Rheinland.