At Eurosatory 2022, Rafael showcases the smallest member of the SPIKE family: the SPIKE Firefly. 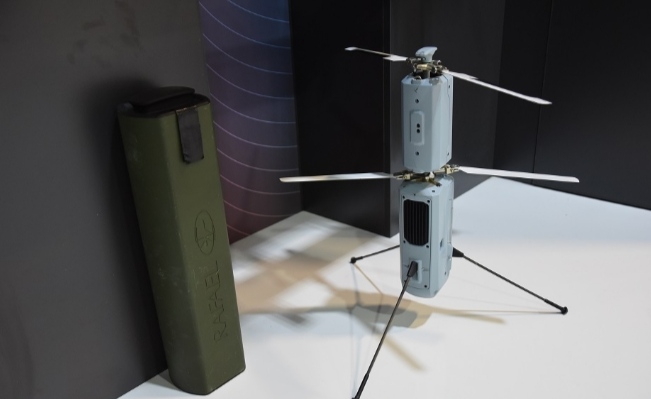 FIREFLY’s modes of operation include fly-bywaypoint and fly-by-video, in which the operator controls the LM heading by touch commands on the video itself, allowing intuitive operation. Once targets are detected, whether visible or Beyond Line of Sight, the operator locks onto them and attacks with pinpoint accuracy. The FIREFLY LM can be recalled back to the operator at any time before the final attack command is issued.

The FIRELFY munition includes an advanced multispectral seeker with both uncooled IR sensor, high-definition CMOS day sensor as well as a proximity sensor allowing the system to detect, identify, track & home on very agile targets. In addition to the seeker the munition includes an encrypted data link and a lethal blast fragmentation warhead.

FIREFLY can also be supplied in a vehicle-mounted configuration, designed for IFVs (Infantry Fighting Vehicle). The integrated system enables the launch of FIREFLY LMs from within the IFV. The LMs acts as an armed scout for the armored formation both as an effector for removing threats on the vehicle’s path and as a recon asset for enhancement of situational awareness.

In May 2022, Rafael Advanced Defense Systems and its US subsidiary RSGS demonstrated the SPIKE FIRELFY loitering munition at the U.S. Army Expeditionary Warrior Experiment 2022 (also known as AEWE).

U.S. drone maker AeroVironment announced it received an Other Transaction Agreement award by the United States Army on Aug. 18, 2022 for Increment 1 of the Future Tactical...

The Australian Army has launched a new strategy to enhance capabilities in robotics and autonomous systems (RAS). The strategy – issued earlier this month by the Australian...