According to Emanuel Fabian in the Times of Israel on November 25, the Israeli Defense Ministry announced it has procured 50 armored vehicles for the Israel Defense Force (IDF) to use in its near-nightly raids across the West Bank. Israeli troops have repeatedly come under Palestinian fire during the operations. The Israeli Defense ministry says the Plasan ‘Sand Cat’ vehicles were obtained through an “expedited” order, amid the West Bank operations. 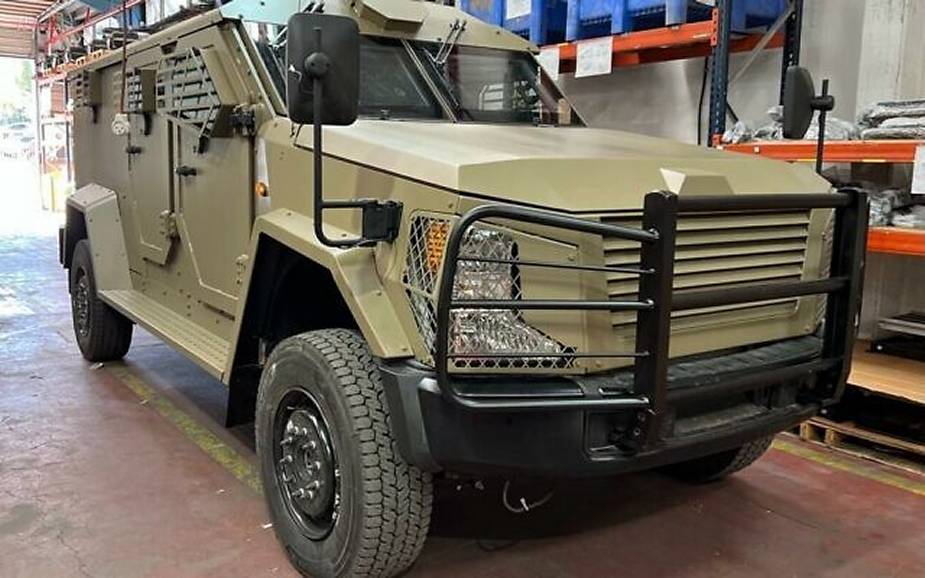 The SandCat is a composite armored vehicle designed by the then Plasan Sasa (now Plasan) of Israel. The SandCat was shown publicly for the first time at AUSA during October 2005. The latest models were shown for the first time at Eurosatory 2018. The SandCat is based on a commercial Ford F Series chassis. They are The SandCat was designed from 2004 and for a variety of applications. It was seen as a potential replacement for the AIL Storm jeeps of the Israel Defense Forces (IDF), and for wider use as protected light vehicle capable of performing roles on deployed operations that until the deployments to Iraq and Afghanistan previously been performed by softskin light utility types. Plasan has also stated the design was intended to demonstrate to partner-customer OEMs that the company could take any automotive platform and design an armoured hull for it.

The original SandCat was designed around an approximate 4,000 kg gross vehicle weight (GVW) and four-man crew, although following feedback from early evaluations this was revised to around 5,000 kg and four- to five-man crew. The SandCat’s then unusual and distinct trapezoidal side windows were optimised to reduce the mass of the heavy armoured glass, while maximising useful viewing angles. Now widely adopted, these were an early and distinct design feature of the SandCat, as was a feline theme in the design aesthetics.

The SandCat was originally known as Caracal, but by Eurosatory 2006 the name SandCat had been adopted so as not to encourage confusion between the Plasan product and the version of IVECO’s LMV being offered to the German Bundeswehr as Caracal by the now Rheinmetall Vehicle Systems Division.

Most SandCats are fully enclosed, although some first- and second-generation models were produced with a small open-topped rear cargo spaceknown to be in service with at least 16 users across five continents, and in a wide variety of roles that range from Police/internal security to combat/patrol.

The SandCat is based on a well-proven Ford Super Duty commercial pick-up chassis to reduce life cycle costs, and automotive used in all SandCat generations have remained standard Ford wherever possible.

Automotives used in all SandCat generations have remained standard Ford wherever possible, the latest fourth-generation models powered by a Ford PowerStroke 6.7-litre V8 diesel developing 330 hp and coupled to a Ford TorqShift six-speed automatic transmission. Standard F550 drive axles are retained, however the front coil and rear leaf springs plus the brakes are uprated/tuned to suit operating weight. On second-generation models, the rear leaf springs were swapped for a Plasan-designed coil spring and trailing arm set-up. Some elements of the electrical system are upgraded to suit specific requirements, with 24 V available if required.

The overall design of the SandCat is such that it can be adapted to perform a wide range of military and Police/internal security-related missions. The original SandCat featured a four- or five-seat protected crew citadel, having two doors on each side plus two rear doors in the crew citadel that open into an open-topped rear stowage area. This stowage area which could be covered if required is open-topped to save weight. First-generation ‘station wagon’ vehicles for Sweden could seat eight in an extended fully enclosed rear body. Second-generation models could seat up to five (Utility) or eight (Transport/TPV). Third-generation models seat up to 10.

Fourth-generation models, which are described by the manufacturer as having a more flexible and modular architecture, are available in three core configurations. The Troop Carrier which seats up to 10 is fully enclosed. The Utility has a fully armored crew-type cab that seats up to five, while the Single Cab option seats up to three. In both instances, the rear of the chassis is available for a variety of payload options. Given the inherent adaptability of the base platform and the modularity of the SandCat’s design, other configurations are possible.

In terms of styling for recognition, for the first time, there are no visible Ford parts on the vehicle’s exterior, the bonnet now a Plasan design. The new front has been designed to allow for localization or alternative identities. The default is a new interpretation of the feline SandCat grille first introduced on the second-generation model. A new window design has allowed for greater commonality across variants, there now being four unique glass shapes as opposed to eight on third-generation SandCats. The previous window designs remain available on request.

Plasan refers to SandCat’s armoring as a kitted hull, consisting of a selection of overlapping bolted and bonded (not welded) panels. Armor composition has not been disclosed but is understood to include a steel base layer with a mix of internal/external aluminum, composite/ceramic, and Kevlar components. The advantages of a bolted/bonded construction are stated to be ease of repair following damage, the option to upgrade parts or all of the protection as new technologies emerge, plus the ability to swap out specific panels to reconfigure a vehicle. An example here might be replacing a solid roof panel for one with a hatch and/or the ability to mount a weapon station. Firing ports for the crew are standard.

A key differentiator between the fourth and all previous SandCat generations is the latest generation’s option of a monocoque body. This variant, the Mine-resistant Light Patrol Vehicle (M-LPV) is the first SandCat engineered as a fully structural monocoque. It retains the Ford F550 automotives but the ladder frame chassis is no longer required, the engine/gearbox utilizing a sub-frame assembly that bolts to the monocoque. The key benefit of the monocoque design is a greater level of underbody blast protection without increasing the height, center of gravity, or weight of comparably configured base vehicles. A stated advantage of the monocoque is that a custom wheelbase can be selected without the associated engineering challenges of shortening any chassis.

Internally on both variants, ballistic protection is augmented by spall lines, while underbody blast protection is augmented by a floating floor, proprietary foot pads and Plasan’s own blast-attenuating seats. The interior has two-zone air-conditioning as standard and can be fitted with an NBC filtration system if required. Additional external protection options available for both versions of the fourth-generation SandCat include a radiator, front wings, and critical engine components. A selection of internal and/or external manual or automatic fire suppression systems can be fitted to provide protection in areas such as the engine compartment, crew compartment, wheel arches, fuel tank and so on. At a lower level, mesh screens are available for all lighting and glazing.