The Bangladesh army is now equipped with the Chinese-made VT5, one of the most modern light tanks in the world of its category. With this new acquisition, Bangladesh is the first foreign customer of the VT5 manufactured by the company NORINCO. It was unveiled during the military parade of Bangladesh Victory day, on December 16, 2022. 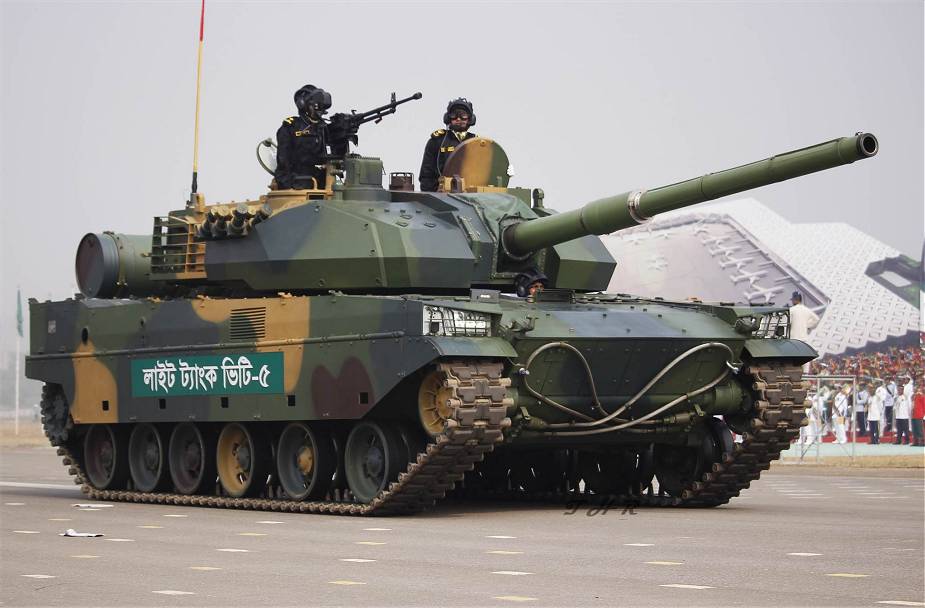 According to information published in December 2019, the Bangladesh Ministry of Defense officially announced that its army has ordered VT5 light tanks from China, a model that is deployed by the Chinese army Xinjiang Military Command and Chinese Marines.

The VT5 is a lightweight battle tank designed and manufactured by the Chinese defense company NORINCO (China North Industries Corporation). It was unveiled for the first to the public during the Zhuhai AirShow China in November 2016.

The main armament of the VT5 consists of one 105 mm rifled gun with a thermal sleeve and fume extractor which has a maximum firing range of 3,000 m. The main gun is coupled to an automatic loading system. The tank carries a total of 38 rounds of 105mm ammunition which can include Armour-Piercing Fin-Stabilized Discarding Sabot (APFSDS), High-Explosive Anti-Tank (HEAT), High Explosive (HE), and gun-launched anti-tank guided missile. The missile has a maximum range of 5,000m and is fitted with a tandem HEAT (High Explosive Anti-Tank) warhead able to destroy armored or tanks protected with reactive armor (ERA).

The VT5 has a crew of three including a driver, commander, and gunner. The hull and the turret of the VT5 is made with all-welded steel armor which provides stand protection against the firing of small arms and shell splinters. To increase protection, the VT5 can be equipped with advanced composite armor and/or explosive reactive armor (ERA).

The VT5 light tank is motorized with a 1,000 hp electronically controlled diesel engine mounted at the rear of the hull. and coupled to a hydro-mechanical full automatic transmission with a pivot steering capability and a cooling system. It can run at a maximum road speed of 70 km/h, 35 to 40 km/h in off-road conditions with a maximum cruising range of 450 km.